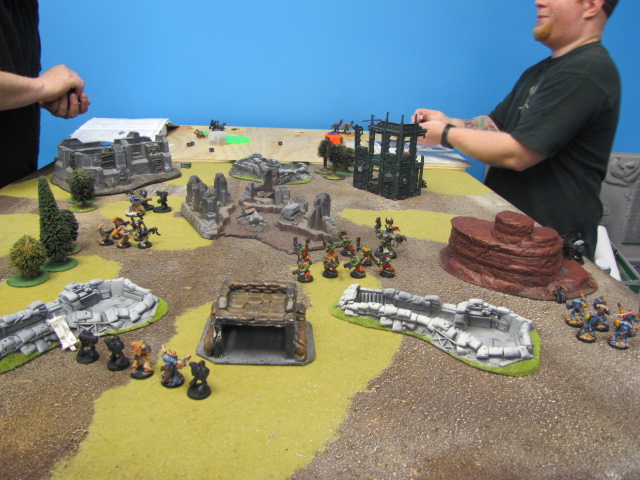 Of course, while Zni and I got in a game, Robbie and Kyle were off on another table. Robbie is much less familiar to the rules than we are, but seemed to be holding his own in this game. Now he has some Orks of his own back in possession, and I'm sure we'll see a quickly strengthening "WAAGH!" soon. This battlefield, though simple, looks surprisingly nice and balanced. I'm not sure what happened at the end of this game though, as Kyle pulled out a 6-1 victory, which led to him and I playing a 'Championship Game' for the day.

Prior to this game though, as Robbie and I are finishing up, I grab a quick pick-up game with a local Eldar player. I haven't actually ever played against my own codex before, he hasn't played Battleforce Recon before (not like that's a hurdle, though,) and he has a bit more knowledge of 6th edition than I. I fail to look over his list thoroughly -- admittedly I am not familiar with army list apps. The list looks something like...


So a Dire Avenger deathstar creeps up the board under Fortune, and Rangers take shots at my 5-man squads thinning them out a little faster than I'd like. I still haven't figured out the whole skyleap-automatic-reserves thing at this point in the day, so I deploy the Hawks thinking the guns would be fine against T3, and maybe they can just kite the Avengers or draw fire.

Well, they do, and I walk them into a Bladestorm I didn't think they had. I think I also fail a charge, not sure. Things look grim with no other target on the board (a second DA squad has yet to arrive from reserves) and I have 3-4 Dire Avengers, my farseer being sniped at, and a Wraithlord on the board. He had already controlled 2 objectives at this point and there was little hope in blasting him off either one, so I graciously conceded. Well, it might not have been so gracious, I was probably visibly shaken at getting my ass whooped, but that's life! Runes of Warding/Witnessing I've never really used and seem like they can be really good, but his HQ was approaching 200 points, and I'd prefer to have more space dudes on the table... maybe.

Anyway, onto the final game of the day! 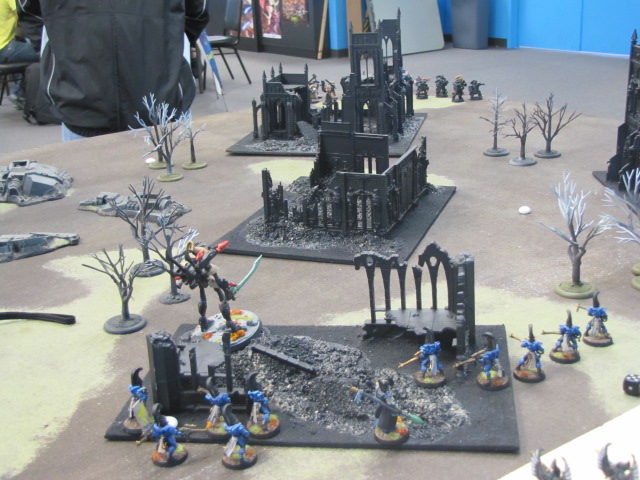 Objective placement is rough on me in this one. Kyle deploys first, and I seize the initiative, which is cool, but I would really have liked that other corner. I have virtually no line of sight blockage on my home objective and I'm gonna have to trek to get to a second one. 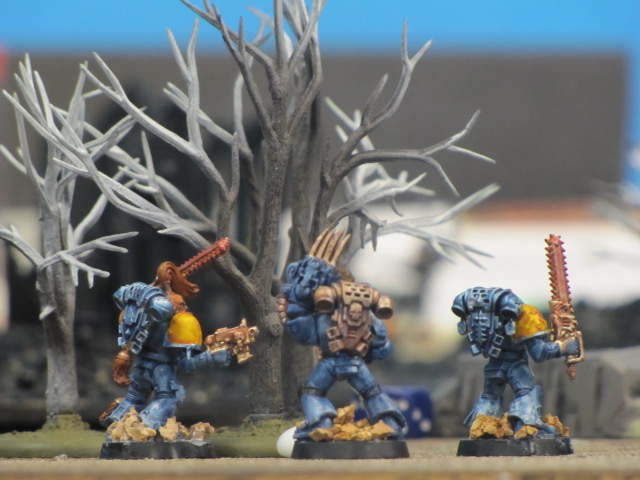 My troops all fail morale checks, get wiped out in assault, and other stuff. I think I am left with a Wraithlord at the end of the game and maybe some Swooping Hawks. Kyle scores Slay the Warlord and First Blood in a single sweeping advance, and has two objectives at the end of the game, for 6-0. His models are also coming along pretty nicely (pictured above.) 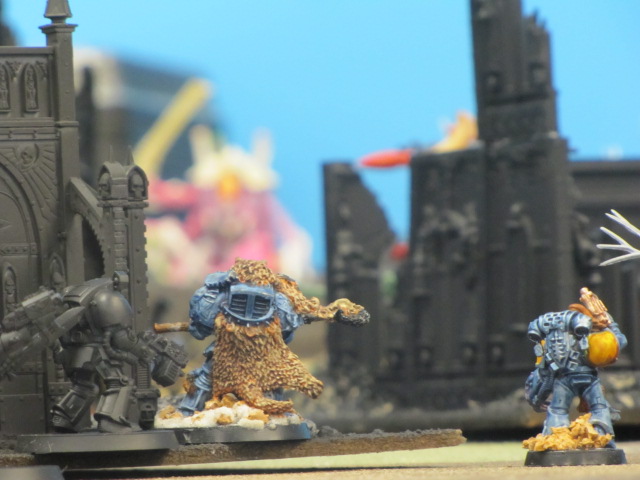 There's nothing more unappealing than a horde of grey plastic. Anyone who has ever bought more than they could paint surely knows what I'm talking about. Luckily, playing these 500 point games kind of divides a large collection into a nice chunk that's easily painted. Everyone playing in our little casual league is making great progress in the hobby and the game. 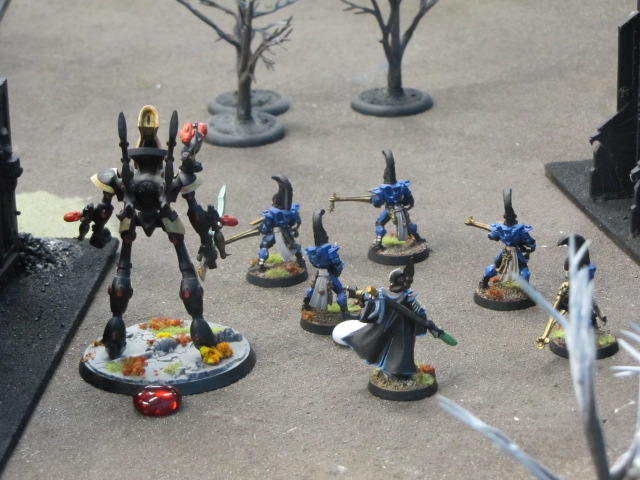 In honor of the store's first 'finished' themed 6x4 tabletop, I put autumn flock on all of my bases. You may have noticed I also black-rimmed the base of the Farseer, I think it looks better. I'm not actually playing on the autumn board in this picture, but I figured I'd give it a mention. 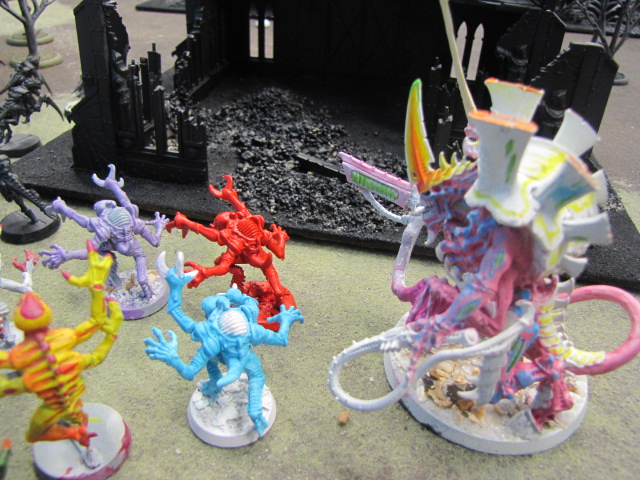 Zni paints like a mad scientist. This quarter or half-finished Hive Tyrant looks crazy right now, but I've seen many other pieces from her come together at the end to have stunning results. The basing was done with crushed seashells, and the color work has progressed even farther than this recently. I have no doubt the end result will be one of the most unique Tyranid collections in the world. 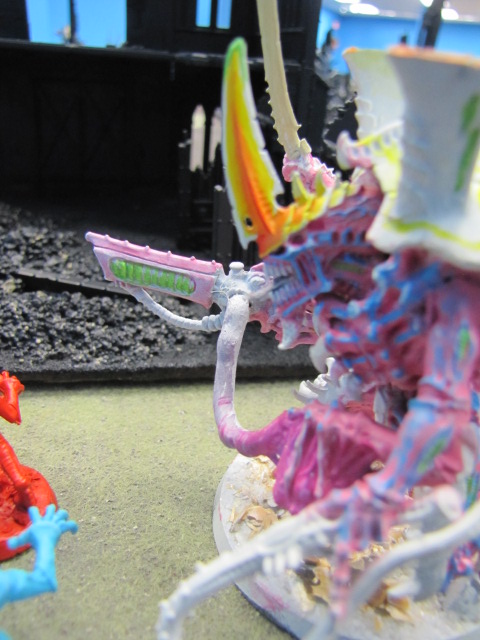