Pictures from the first 40k meetup 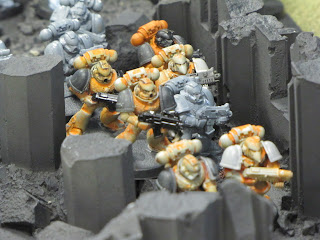 We held our first meetup Saturday and it was a great success. We played a four player game of Battleforce Recon, modified to have a 12"x18" rectangle deployment zone on a 6'x4' board. I got in another game Wednesday as just a 1 on 1 with Battleforce Recon, using a 6'x4' board, and I think for one on one games, 4'x4' is probably best. 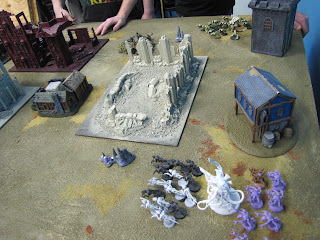 All terrain was masterfully picked out by Zni, who wanted to display some sort of world where fantasy blacksmiths and farmhouses remained preserved in a world permeated by the 'Adeptus Mechanicus.' Just kidding, we're not too picky about terrain as long as it looks cool and has some great LOS or movement blocking effects. Zni has deployed her hormagaunts (see the previous blog post for army lists) and Hive Tyrant with a squad of Genestealers in the back. The other Genestealers are held in reserve to outflank.

Chris, who is sporting a similar list across the way, has an old-school Hive Tyrant out, with some Hormagaunts, keeping a large Genestealer brood with Broodlord in reserve. 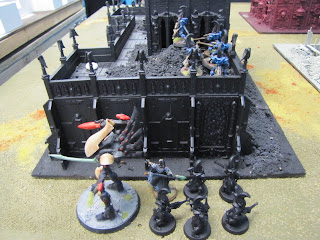 I set up as far out of line of sight as possible. Space Wolves are chillin at the other side and my guys are squishy. The name of my game is buying time, and trying to resolve any conflicts thrown at me as efficiently as possible. The objective is on top of this nice ruin which blocks a lot of view. My grounded Dire Avengers, Farseer, and Wraithlord will try to trek to whichever objective seems safest. 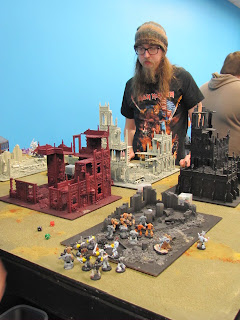 Kyle has deployed his Space Wolves to take advantage of the objective in the ruins, and he moves forward to go get it. There's not a lot of visibility towards me, so his first turn winds up being pretty short, firing a few shots sideways across the board into Chris' green Tyranids. 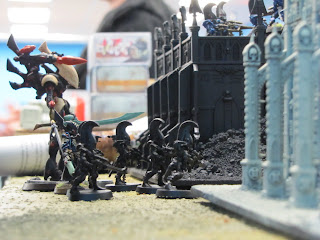 Not much for me to do but scuttle across the open alley and hope I don't get hit. In retrospect, I don't know what I'm doing here, since I'm trying to explain the rules and whatnot, I completely forget, for the entire game, that I have psychic powers, and that I can run. Even though I'm explaining to Zni and Chris that they can do this. 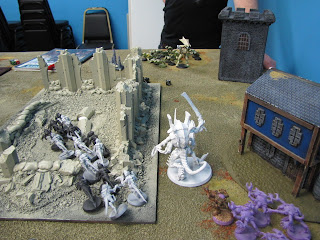 Zni goes flat-out towards the objective with the Hormagaunts, and whips the rest of the guys around to support the Hive Tyrant. The Tyrant throws a large blast into Chris' Hormagaunts, a sad day for him indeed... 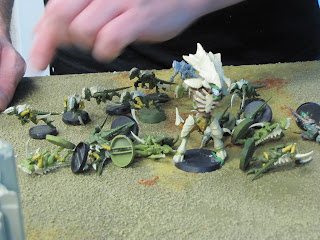 His Hormagaunts have taken a lot of casualties from the weapons fire... before he even gets to begin his turn. The rest of his Gaunts start moving towards Zni's objective, and the Hive Tyrant shuffles along a bit too. 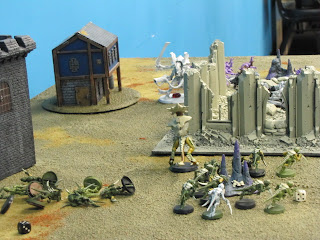 A lucky shot lands a wound on the opposing Hive Tyrant, though. 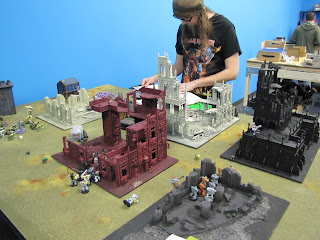 Kyle's Space Wolves move towards taking two objectives, and start tucking into some serious cover. It's looking like a pretty tough rock to beat, we've all been picking on each other at this point, but Kyle hasn't taken any serious casualties! 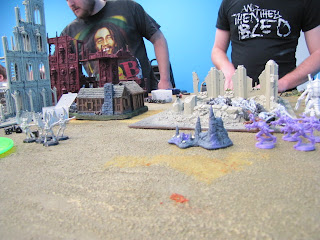 My hawks land! They drop some grenades on some squishy guys, blow up some dudes, then immediately Skyleap away. I noticed this game, and Wednesday, that they can be problematic to show up. My warlord traits were not favorable to me this time, and I don't have an Autarch, so reserve rolls are only good if you can make them! 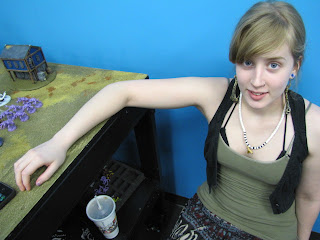 Hey look, a girl playing Warhammer! I had to get a picture of how excited mastermind Zni is that she is just carving up everything so far. 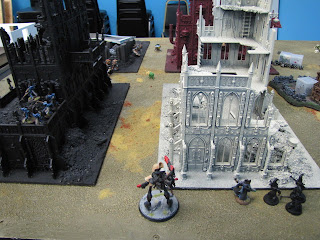 Oh, yeah. Here my Wraithlord is standing here firing (un-guided, because I'm a big dummy) Eldar missiles at Kyle's Rune Priest, trying desperately to Slay the Warlord, while the Dire Avengers squad with the Farseer has taken a few wounds to living lightning over the course of Kyle's last turn as they crossed the alley. 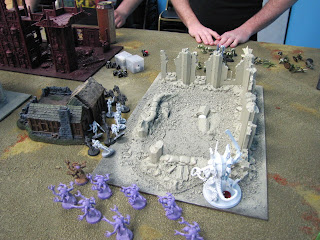 Zni ditches her objective on her turn, preferring to run her horde diagonally to catch some power-armored meat snacks. Some more shooting leads to more casualties on Chris' side. 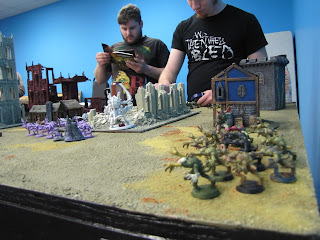 Chris has a plan though. Genestealers outflank and come in behind Zni, with a Broodlord! 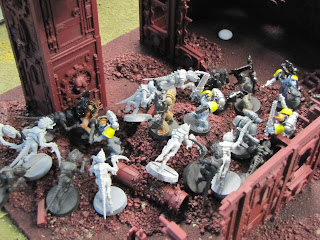 Kyle and I largely stay out of sight on our turns. Zni charges the Hormagaunts through the terrain and goes to swarm the objective. Sadly, the Hormagaunts wind up in bad shape from the assault. 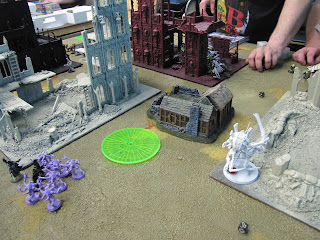 The same can't be said for the Genestealers... they rip into my Dire Avengers and Farseer pretty easily. Zni will get Slay the Warlord here, and First Blood, as she wipes out these guys. 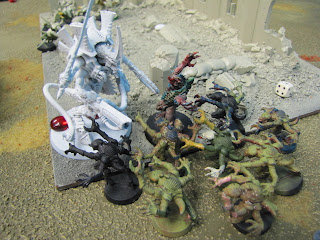 Now that Zni is split up, Chris' Genestealers march in to try and take out the Hive Tyrant. Over the course of several turns (and many failed wounds and Broodlord power tests) Zni's Tyrant takes them ALL out! 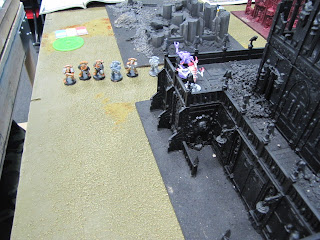 Zni's outflank didn't work so well. She tried to come up my board edge, but when faced with the Power Armor, she couldn't resist! After taking some shots from a line of Space Wolves nearby, she runs into the ruins for cover, but is eventually cut down entirely on this side of the battlefield. 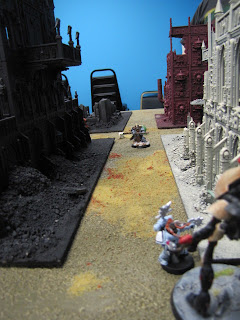 The Wraithlord lasts the entire game, unable to kill that damn Rune Priest, and being forced to crush the skull of a Lone Wolf who really wants to die. Well, we end the game with Zni holding an objective, First Blood, and Slay the Warlord (4 points.) Kyle has two objectives (4 points.) Chris had nothing, pretty much wiped out, and I had one squad of Dire Avengers on my rooftop objective (2 points.) I think we may have scored objectives as 3 points in this particular game, while we were playing... I didn't actually find the Battleforce Recon rules until after our engagement.

This being our first foray into 6th edition, and being a four player game, it took us about 3 hours to finish up. The staff at the game store were more than happy to accommodate us even though they were using tables for an Infinity tournament I failed to notice when scheduling! We tightened up our rules knowledge Wednesday and should be looking good for more games this Saturday. Hope you enjoy the pictures!
Posted by Ed Vaughan at 1:01 PM