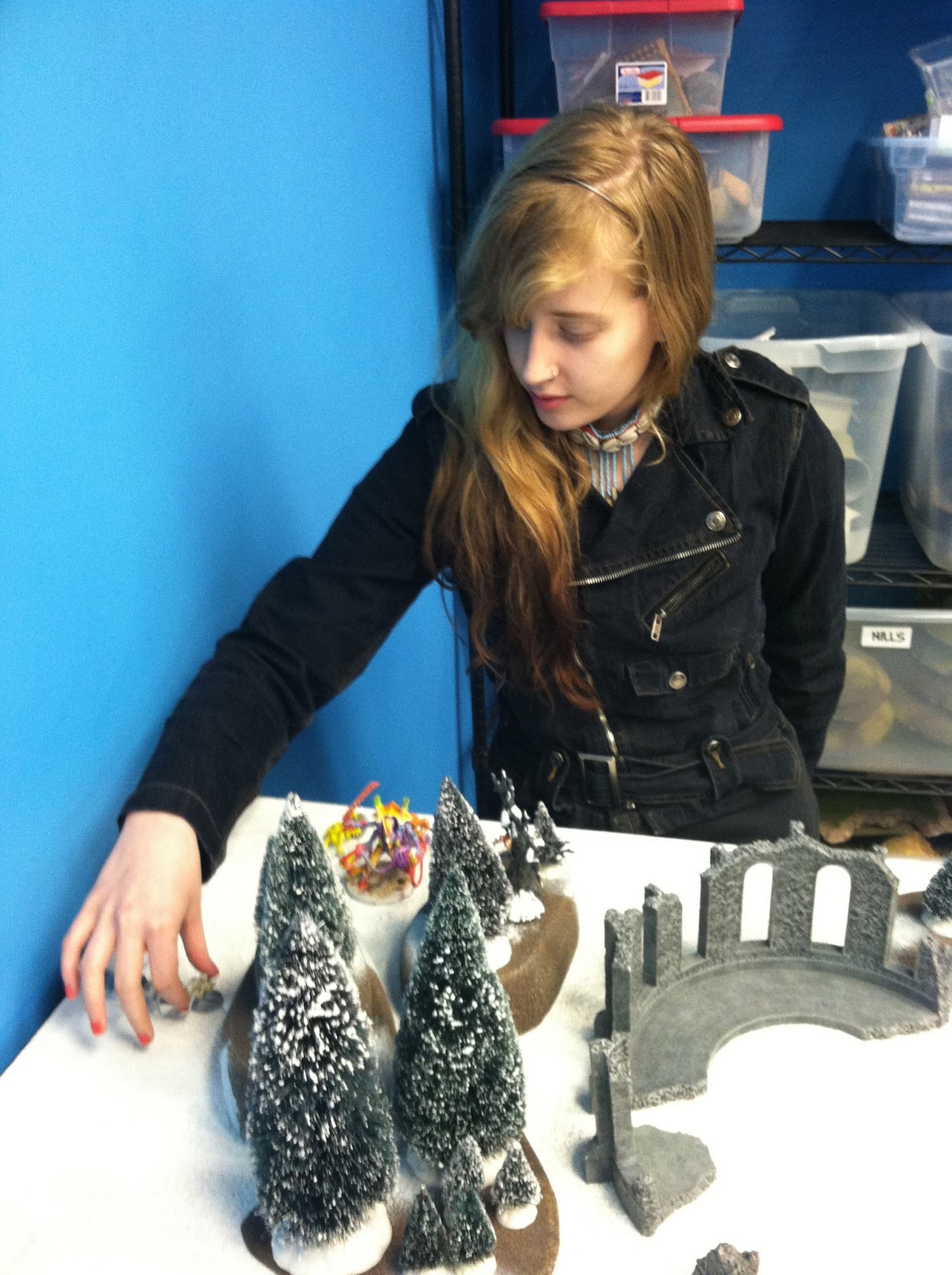 So, we had a pretty odd schedule today, and decided to come in for some games early (our local game store, Games and Stuff, opens at 10 am) so that we could make an early band rehearsal around 2 pm. Zni and I got an early game in while a Warmachine/Hordes tournament was underway. They were using 4x4 boards, so we actually got to play on one of the newly finished 6x4's in the store! Thematically, these hand-made boards are some of the best in the area, supporting Gale Force 9 scenery and some DIY stuff very well. 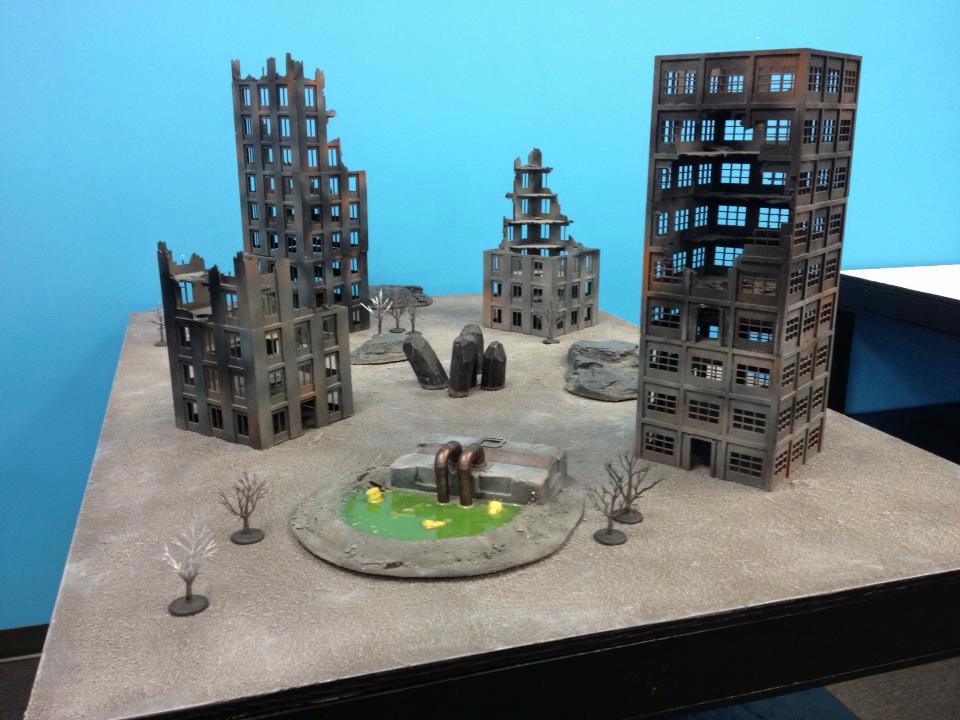 The "Urban Wasteland" has typical greys that allow a standardized "Astrogranite" texture paint or old school codex grey/fortress grey drybrushed rubble to match well. These buildings here have a lot of stories that are fully accessible -- the buildings separate near the middle and the first few floors are mostly intact. Getting models in and out is surprisingly easy, and the sniper roosts here are just ridiculously hard to get to. 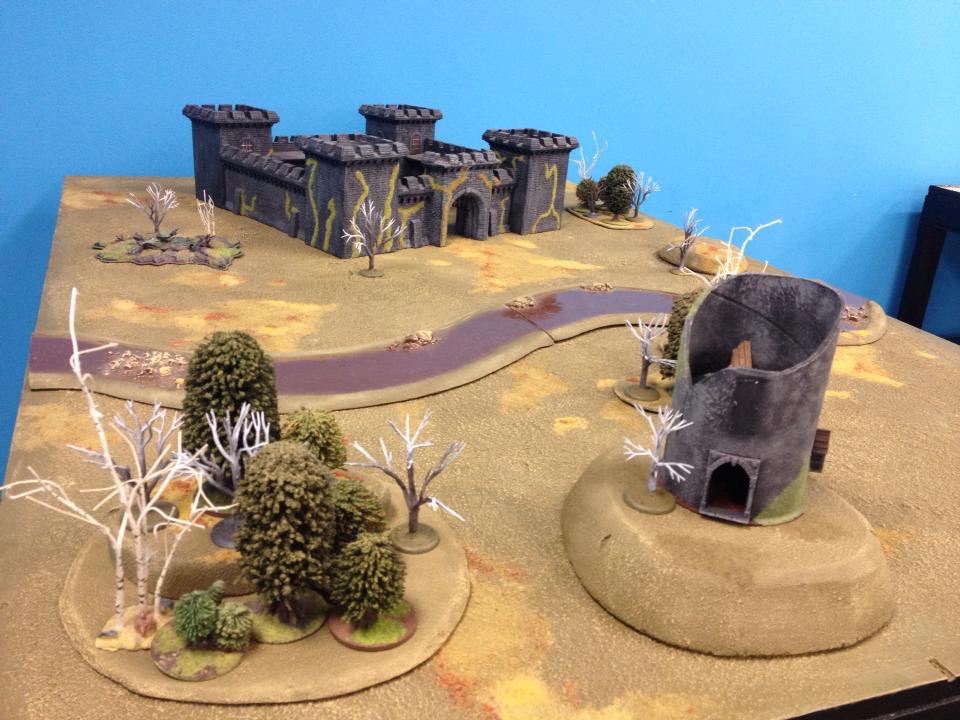 The Autumn Forest board looks great for games of Warhammer Fantasy, although I'm not a WHFB player really. This was the first board to be completed in the store, and we've played on it quite a bit. Of course, being a modular board at a game store with more terrain than this, we have re-arranged the terrain and added/subtracted things to make it a bit more 40k-themed at times. I actually added autumn flock to my Eldar army to match the board better. I do particularly like fall themes...

Also, cool thing to note, the ruined tower has bits of Mordheim architecture embedded in it, truly old-school and hand-crafted! 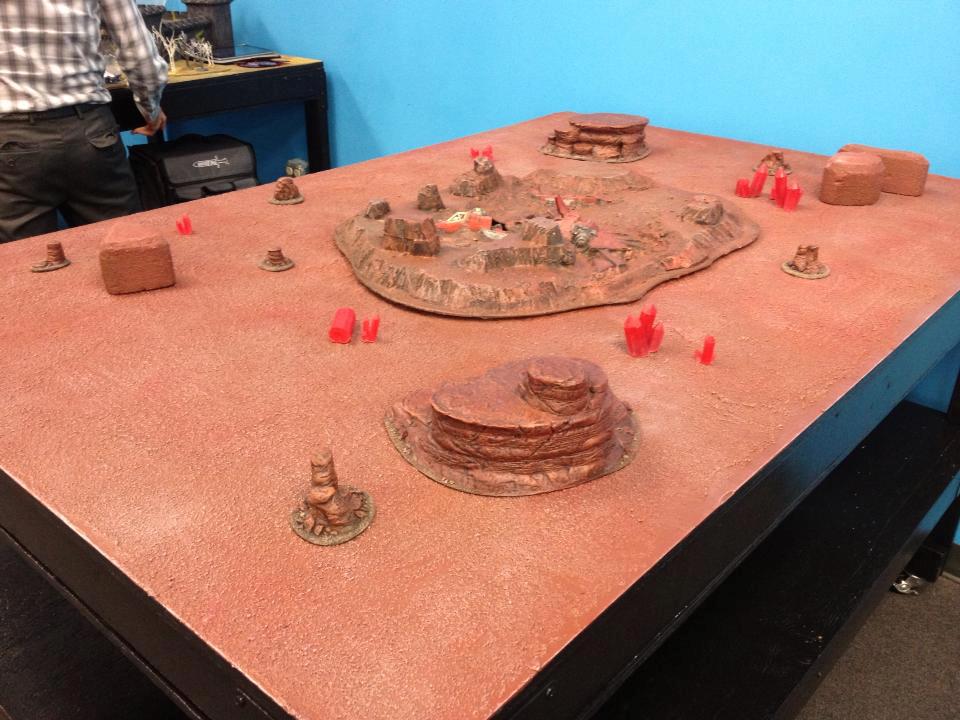 The Martian Badlands board. Some other 40k gamers came by this Saturday for a 1500 point game here, and some more stuff afterwards I believe. Sadly I forgot my camera and most of the pictures today are taken from the GnS Facebook page or my iPhone. I mentioned before that some other shop(s) have made "martian" or "red planet" boards that moreso resemble childrens rubber play mats, with bold primary colors that don't look realistic. GnS minis chief Sarah Supik actually went out and grabbed paint swatches to closely match natural colors seen in photographs and such. The result is some pretty solid looking tables without the mandatory hills, slopes, and skull-crevices of boards like Games Workshop's Realm of Battle. 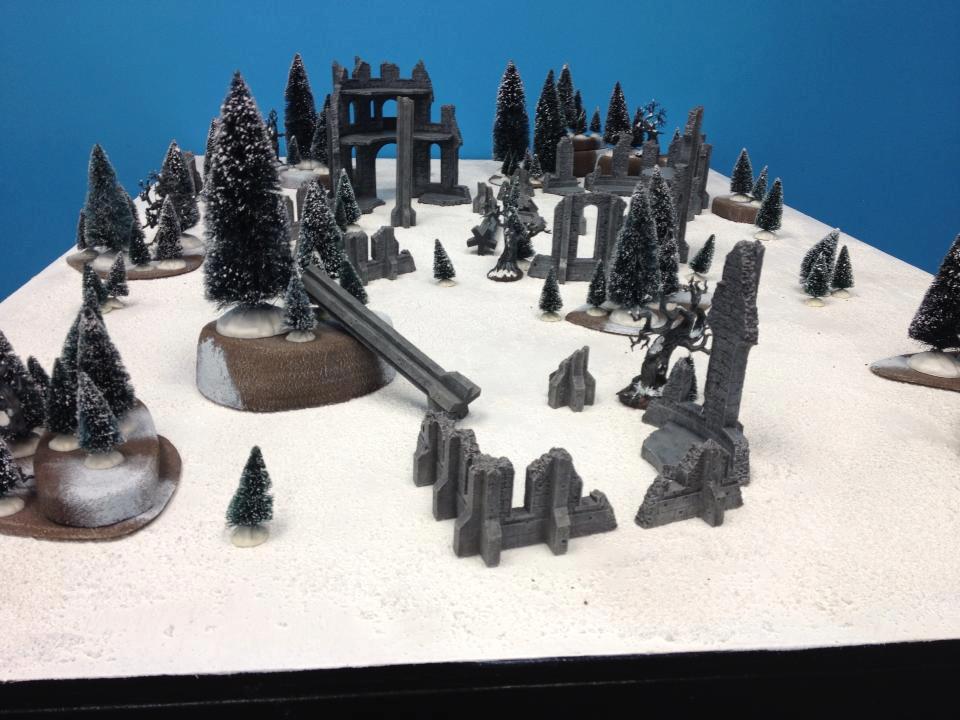 The Winter Forest table. I've been most interested in playing on this recently because as of late, we've been using a lot of official 40k ruins terrain, usually with area terrain bases. This results in a lot of games with difficult terrain tests, and lots of 4+ cover. These trees and small ruins here have 5+ cover saves and very little difficult terrain you can't maneuver around. As a result, we decided to play some games on the full 6x4 today using a modified deployment zone (12" from a board edge, instead of 12" from a corner with the opponent deploying in the opposite.) Otherwise, what we played was still Battleforce Recon at 500 point, using the same lists as always... 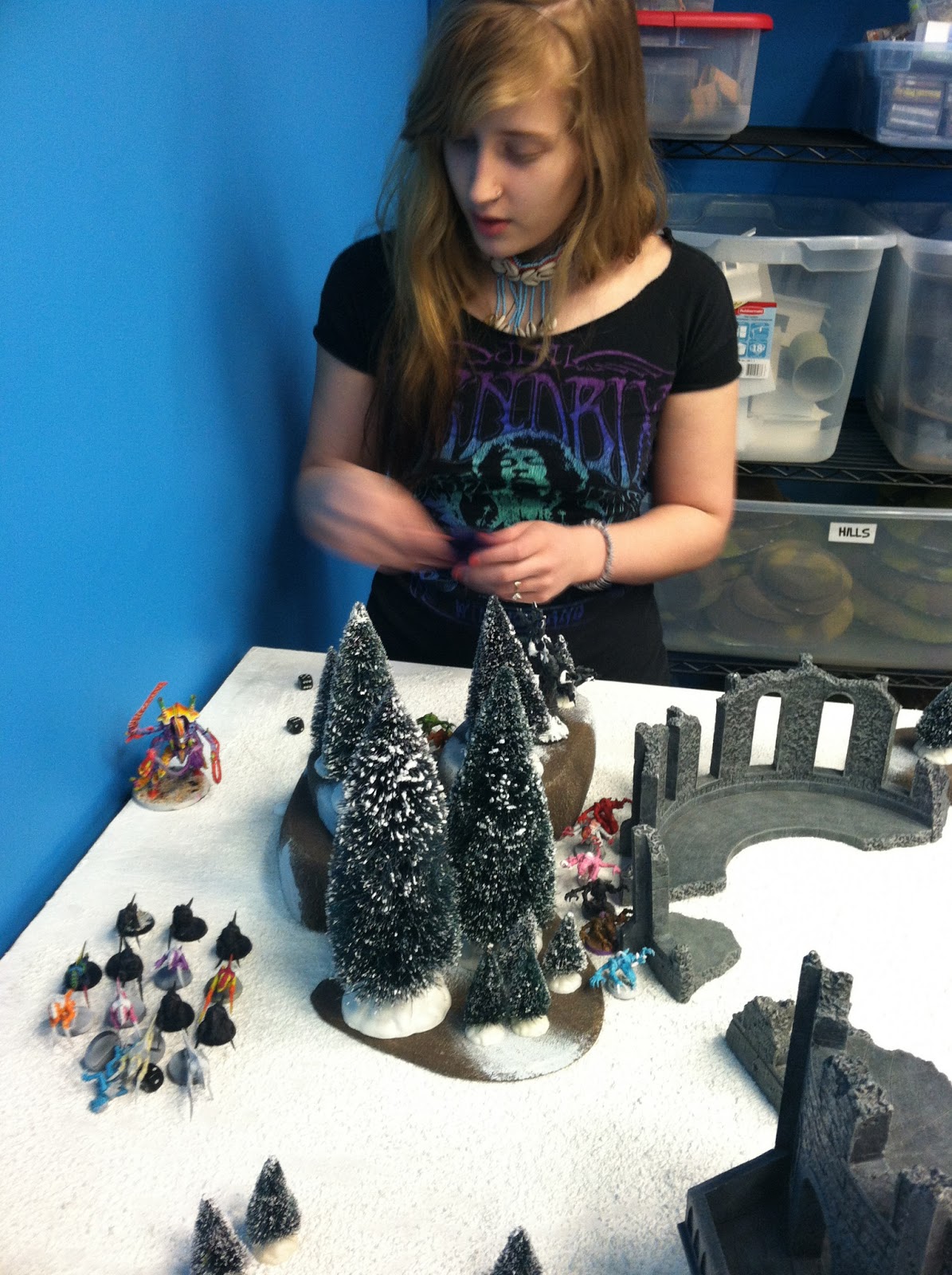 Zni's Hive Tyrant has progressed quite a bit. She is a bit tired from activities yesterday, but still managed to win the third game versus my Eldar, scoring 4-3. Not wanting to take a title match with Kyle, though, she sat out and watched as I played versus Kyle, getting beat in that game 4-0 (1 objective, first blood, and slay the warlord.) The Space Wolves must feel right at home in a winter wonderland! Some progress has been made on Kyle's end too, as the Long Fangs (missile launcher guy and captain) finally start seeing some basic blue paint. 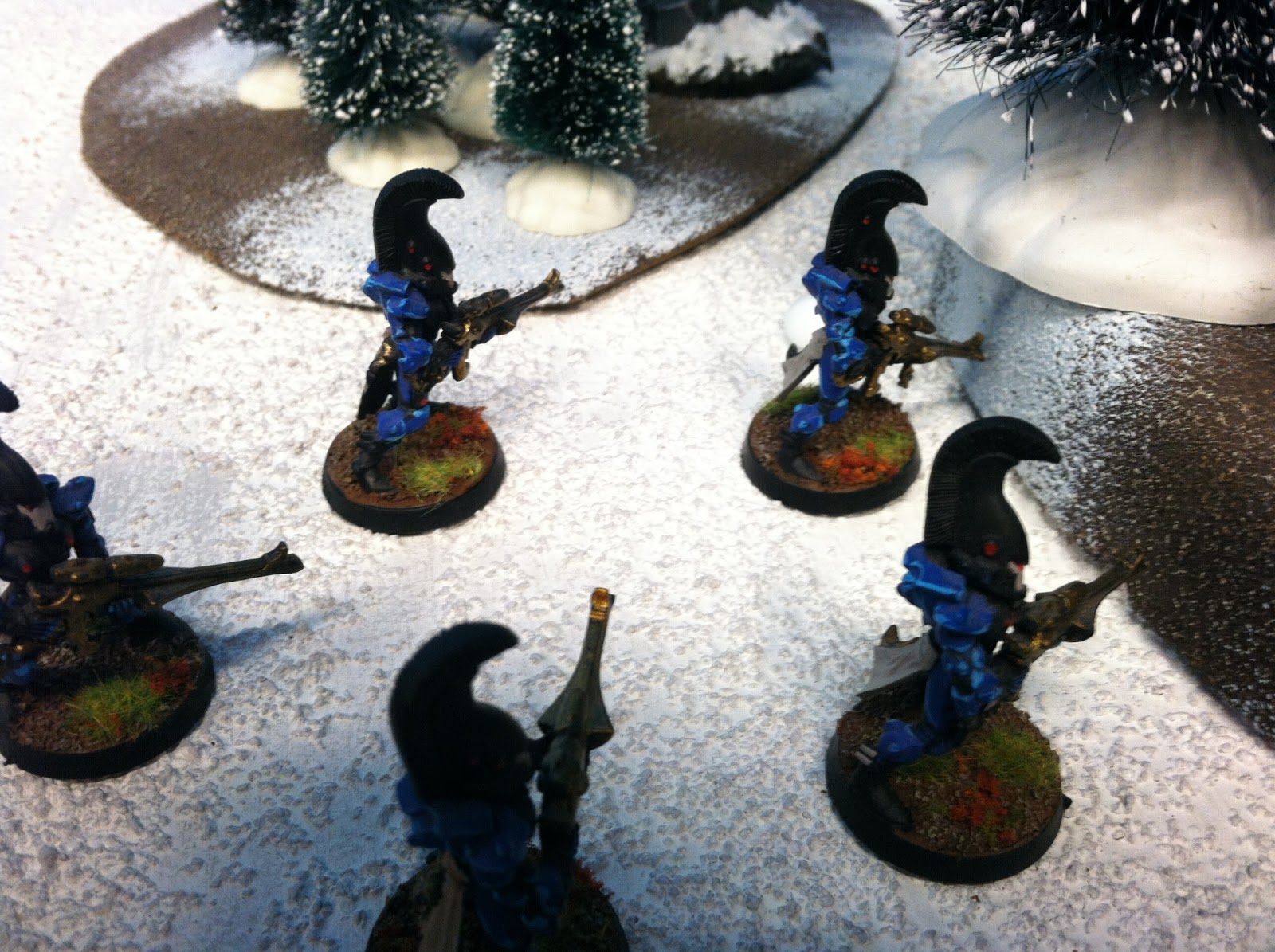 A random shot of some Dire Avengers. Hope you enjoy the pictures!
Posted by Etna at 6:27 PM