Battle Report: Space Wolves vs Tyranids vs Orks vs Eldar 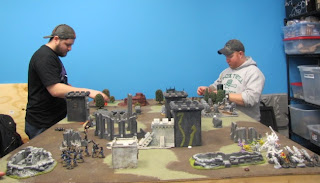 We kept the terrain mostly the same after the last game, but pulled off the 2'x4' blocker and made the board 6'x4'. Battleforce Recon again, using modified 18"x12" deployment zones (since it's a four player game, decided to try it out again.) Robbie here hasn't played in years, and will be playing Orks; Kyle's got some Space Wolves (a different list, with painting progress!) and Zni and I are using the same lists. You can see Zni's deployment here... I'm not set up yet. 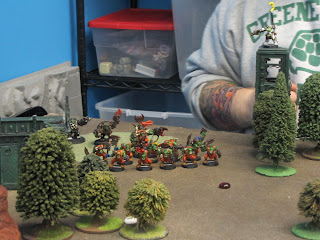 Robbie has set up close to an objective with Snikrot in reserve, as well as a squad of Grots in reserve. Here he has some Ard Boyz and Meganobz with a Warboss. 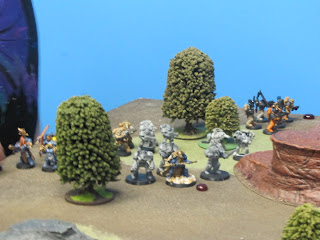 Blurry picture, but the Space Wolves deploy (there's an objective out of sight on the other side of the red rock.) Terminators with a Rune Priest, a one-man missile launcher, and some 5 man plain dudes sit in the back ready to roll, with I believe nothing held in reserve. 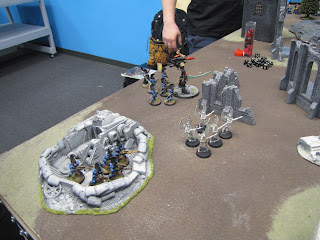 I deploy everything, nothing in reserve. Risky tactic for Eldar, but I want to test out the Hawks here again. I also manage to roll and seize the initiative, which everyone agrees makes me the skip to first. 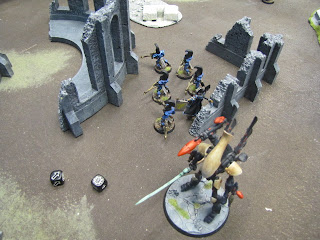 I decide to walk the Wraithlord over to take a Krak missile shot at the Rune Priest, but to no avail. The Dire Avengers and Farseer move toward Zni's Tyranids. 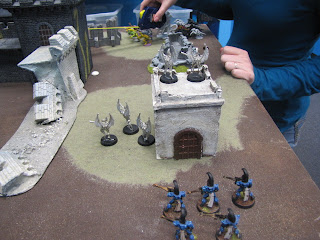 The Hawks move forward, take some shots, and the other Dire Avengers try to move to get cover from the Hive Tyrant. The Hawks do some good here, actually taking out some Genestealers. Zni has started moving in this picture... 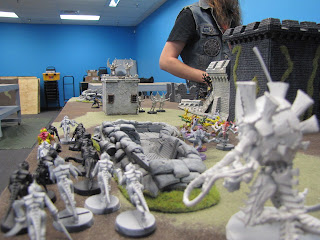 It seems I've gotten her attention and a grudge match from last game begins! The Tyranid forces redirect and start heading to eat some Eldar. Luckily, I have some pretty clear firing angles from this direction. 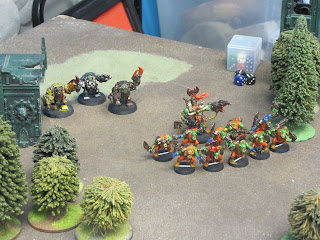 The Orks scoot towards the Tyranids. They don't run this turn, opting to take a shot at the Rune Priest and Terminator Squad, to no avail. The Meganobz move up, too. 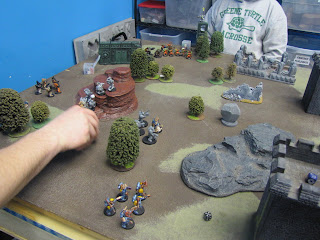 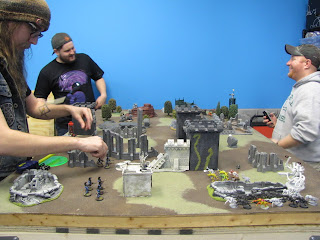 My turn comes around, and I decide to move everyone towards the Tyranids. It'll be a bloody battle, but hopefully I can largely ignore the Orks and Space Wolves. I have no objectives near my deployment, so I'm looking to just do as much damage as possible while walking into Zni's deployment area. All shots get guided and some units get doomed. The Hawks pull out of assault range thanks to wings, and the DA move to sacrifice themselves. 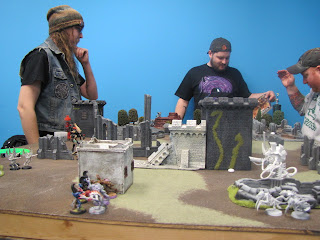 Zni's Hive Tyrant blows away two Hawks, and you can see the results of my attacks on the Gaunts and Genestealers. 3 of each remain. The Genestealers make it into combat with the Dire Avengers, but the Gaunts can't really get in, and the DA actully hold their own! 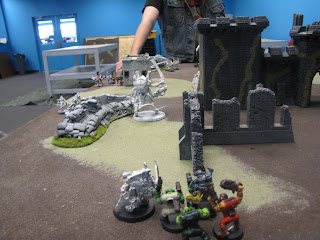 Snikrot comes in right behind a wounded Tyranid force. 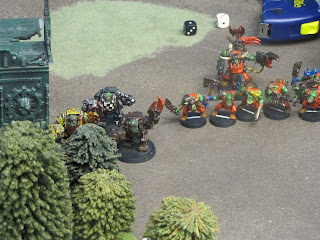 Meganobs steadily advance. The Ard Boys, having suffered some shooting and having to regroup, get back to work getting to an objective. Kyle tries some psychic powers, but I get to Deny the Witch with my Farseer. His movement puts him closer to some objectives. 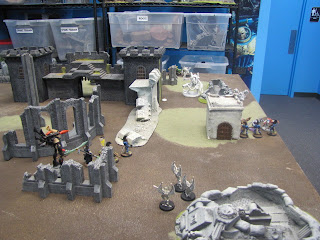 I'm staring this down at the start of my turn. I doom the Gaunts, guide the Hawks, who move forward to score First Blood on the Gaunt Squad. Everyone else unloads into the Hive Tyrant, scoring a wound. The Dire Avengers hang in there against the Genestealers! Yes! 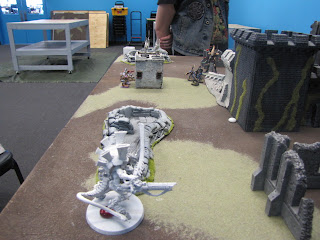 Zni shuffles about, the Genestealers finish up and consolidate behind cover. The Hive Tyrant uses The Horror to great effect on Snikrot's squad, who fails the morale check and runs off of the board. 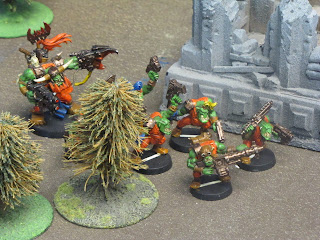 Robbie's 'Ard Boyz move towards the objective, getting into some cover... 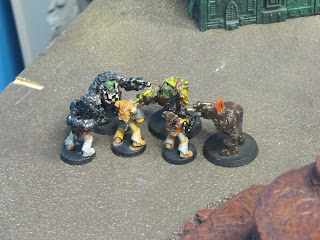 The Meganobz start tearing up some power armor. They won't finish up and consolidate until the Space Wolves' turn. 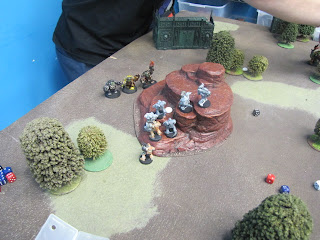 Kyle now has to redirect a lot of focus to the Meganobz, who are threatening his home objective. Sadly, these guys are really tough in 6th edition, and not too far away from the strength of real Terminators. 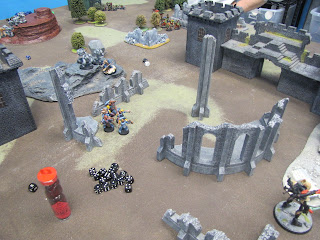 It looks like the rest of his guys are moving to try and threaten the Eldar, but there's not a whole lot they can do from their position. 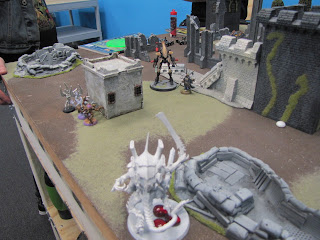 My turn, my Dire Avengers and Wraithlord put two more wounds on the Hive Tyrant. The Hawks roll around to fire into the Genestealers, killing only one, which forces me to charge just to deny them an extra attack. The Farseer survives a Stranglethorn Cannon blast, but all of my scoring units are dead at this point. My plan is to get two points by Slaying the Warlord... 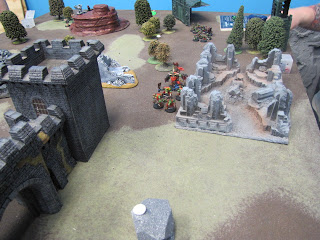 Robbie's Grots have come to take their backfield objective last turn, and almost make it this turn. The 'Ard Boyz look like they might make it to that rock objective by the end of the game! 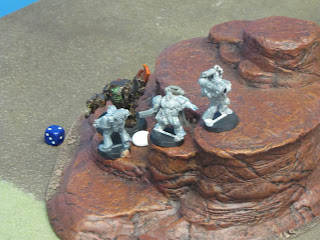 The MANZ have taken some casualties, but the lone one tears through the squad of Space Wolves sitting on their backfield objective. Kyle's Long Fang takes what looks like the last shot at some Grots, trying to break them up. The rest of his forces start re-directing to intercept the Orks going for the rock objective. 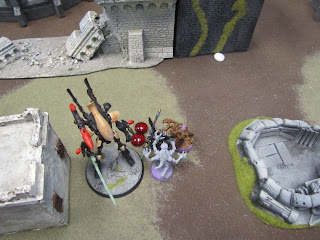 I manage to slay the Warlord, but the Swooping Hawks are done for. The Genestealers reel around to charge the Farseer, hoping to return the favor. He takes two wounds, but passes his morale check and sticks in combat. 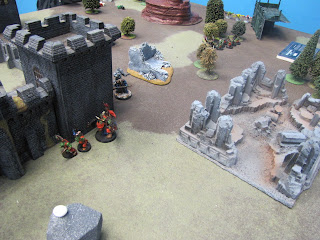 The Orks bolt for the objective despite taking heavy casualties. The Grots have made it to their objective in the trees. 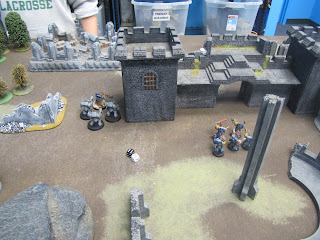 Kyle has completely committed to redirecting and denying Robbie a second primary objective. If he gets lucky he may be able to take it himself. 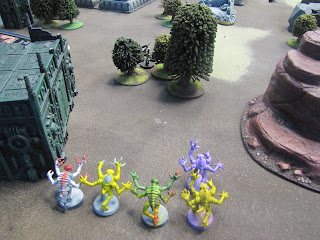 The Wraithlord comes to the rescue and kills the remaining two Genestealers, so the Farseer and him move to simply deny the closest objective. Zni's Genestealer squad FINALLY outflanks, and comes in to try and kill the Grots. Maybe she can steal an objective after all! 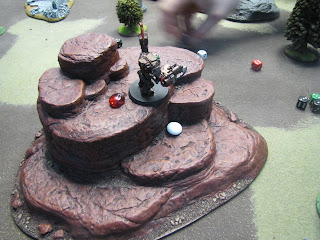 The Meganob has cleaned up the Long Fangs, and Kyle's objective is his to take. He has one wound on him, but he'll hang in there despite that. 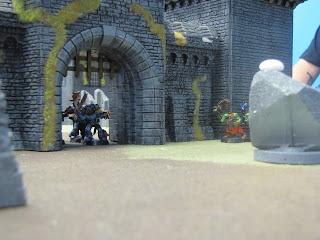 Some Space Wolves come dangerously close to contest that last objective on the rock! 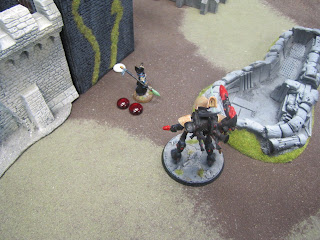 My last turn, with the remnants of my army making sure nobody gets this one. Sadly, I didn't roll a trait that allows my Warlord or Wraithlord to score, so my game is pretty much done from this point. 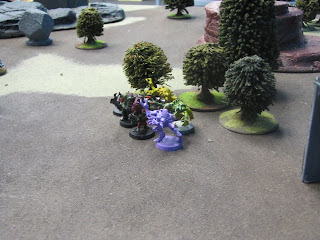 The Genestealers make it to the grots by the end of the game, but are unable to clean up the combat in subsequent turns, and end the game denying the tree objective. The Space Wolves and Orks get into it near the rock, and the Wolves get to consolidate into the rock. The game ends with Kyle having 2 points (primary objective,) Zni having 0 points, Robbie has two points (Primary Objective,) and I have two points (First Blood, Slay the Warlord) which results in a draw. Great game, and we got it done in two hours! Hope you enjoy the pictures.
Posted by Ed Vaughan at 12:44 PM