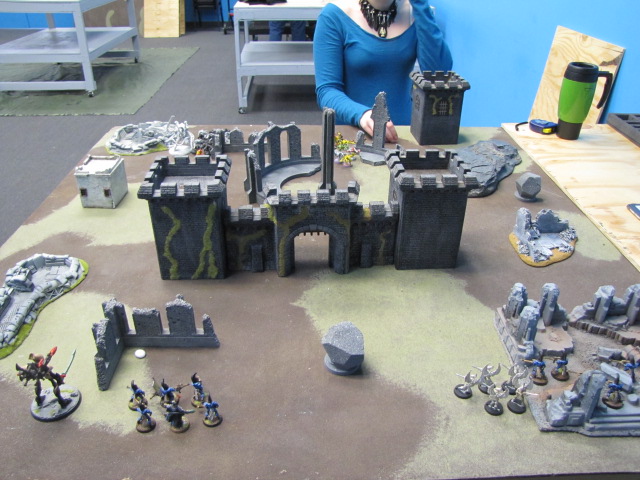 Here's a quick game we played before the rest of the Bladestorm group rolled up on Saturday. We played Battleforce Recon (I've taken the time to write up a mission pack for this here) on a 4'x4' board. We modified the deployment to be 6" away from the board edge. My deployment is pictured above, and I took a chance with keeping the Swooping Hawks out from the very beginning, just to see how they'd do. Oh, and army lists can be found here. 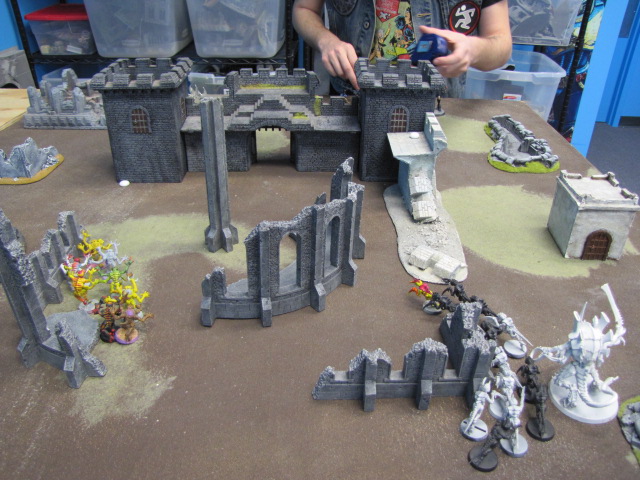 Zni deploys and gets the first turn, as I am unable to seize the initiative. Her 'gaunts and genestealers move and run forward, while the Hive Tyrant takes a shot with a Strangethorn Cannon at the Wraithlord. It's a tough shot, and bounces off. 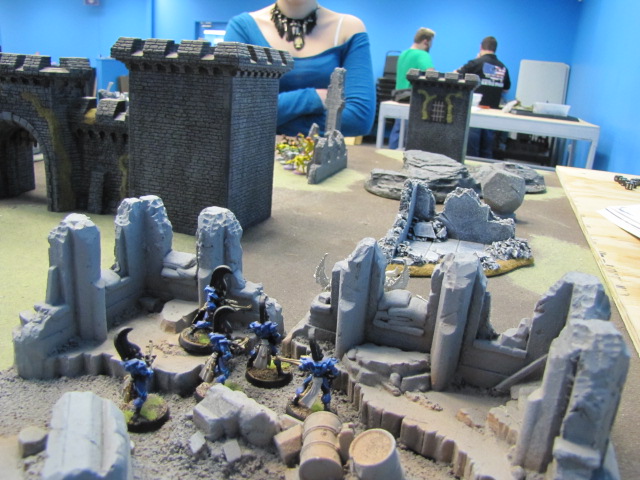 The Dire Avengers take up cover in the ruins, slowly advancing, while the Swooping Hawks position themselves to get some shots on the Genestealers. They are in range, but fail to do any damage -- my Farseer is on the other side of the field, and can't buff them or cast doom on the enemy quite yet. 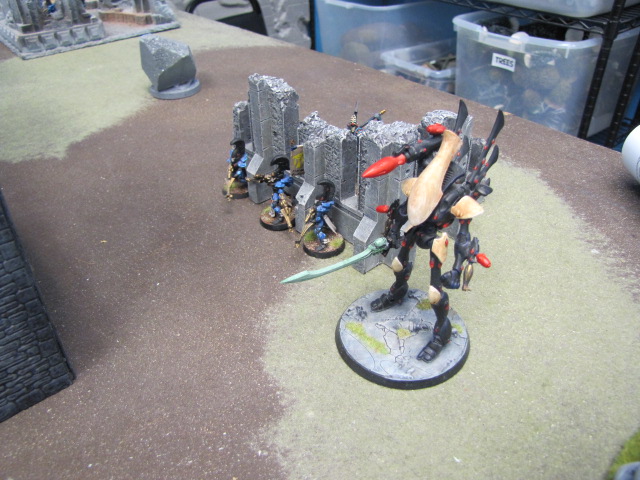 The Farseer stays in cover, the Dire Avengers push through the ruin, and the Wraithlord starts firing Krak missiles down the firing lane in an attempt to put some wounds on the Hive Tyrant. 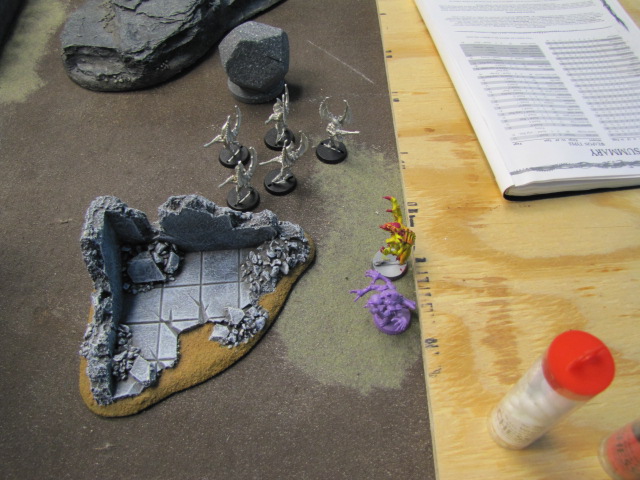 Zni forgets to roll for reserves until after she takes her turn, so we do a bit of rewind and re-assign some wounds. I would have shot at the advancing Genestealers, but her rewind to grab her reserves places her outflanking Genestealers right behind my Swooping Hawks and next to the Dire Avengers. I would've shot at whatever is closer, so her Genestealers take quite a few wounds but do not break and run. 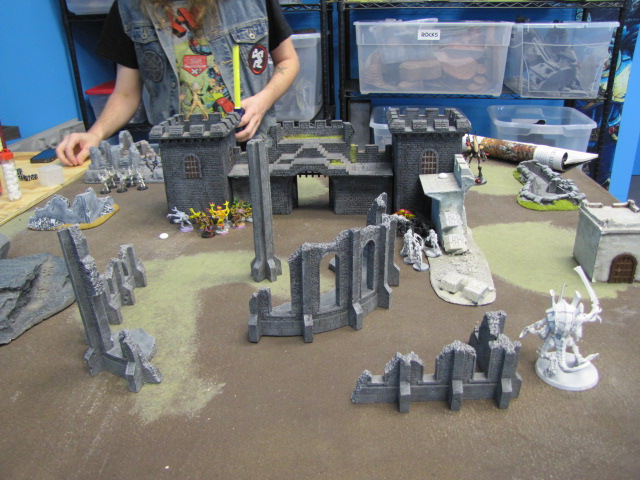 As you can see, the rest of Zni's turn was spent hiding her close combat squads, while the Hive Tyrant stays behind and shoots at the Wraithlord again. He actually manages to wound my Wraithlord this time! 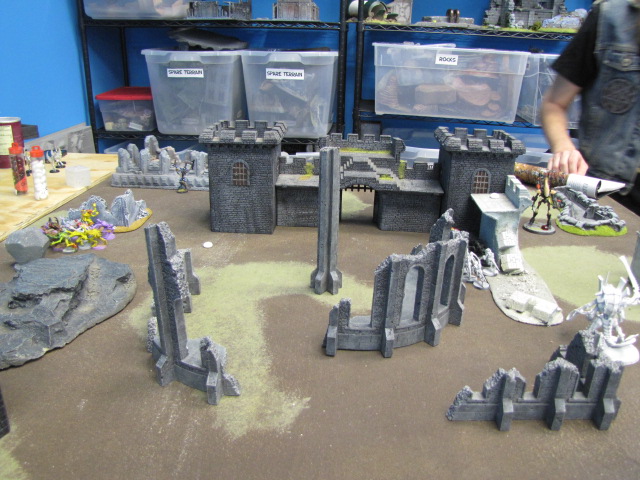 With ineffectual shooting, no line of sight on the gaunts, and the reserves rewind, I'm put in a pretty tough spot. The Swooping Hawks on the subsequent turn get charged by a squad of 2, and a squad of 7 Genestealers, which wipes them off of the board in a turn. They consolidate into the cover of the ruin. A well placed cannon shot from the Hive Tyrant and a lucky scatter nabs quite a bit of the Dire Avengers on my left side of the board... 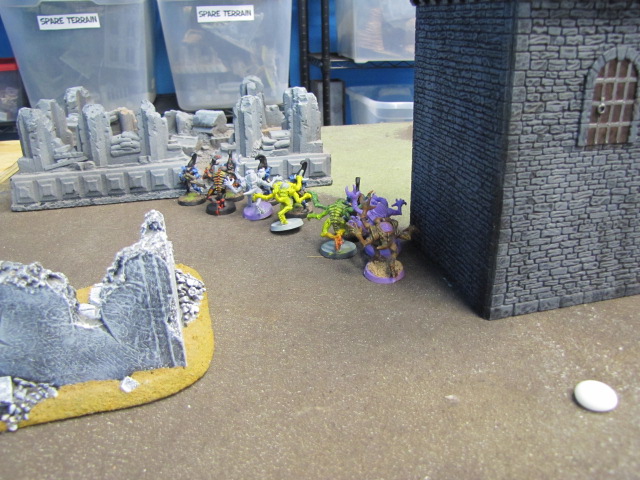 Subsequent charges by the two Genestealer squads seem to wipe out everything they come into contact with. On the other side of the board, the Hormagaunts clean up the Dire Avengers, my Farseer takes a wound... 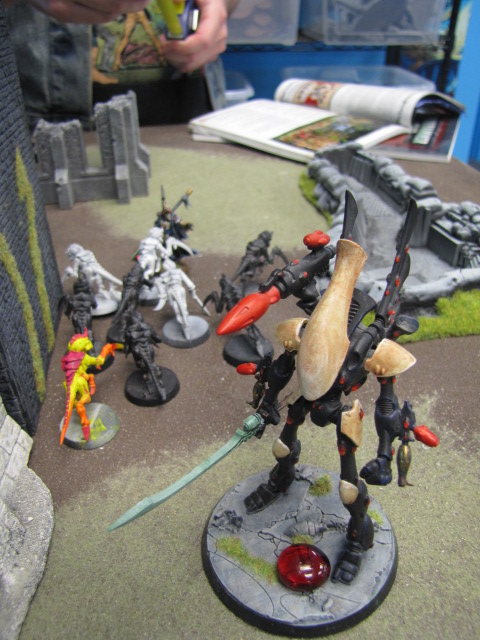 Poor Wraithlord couldn't get a clear shot on his turn, I guess I should have moved him to be more of a blockade for the Hormagaunts... 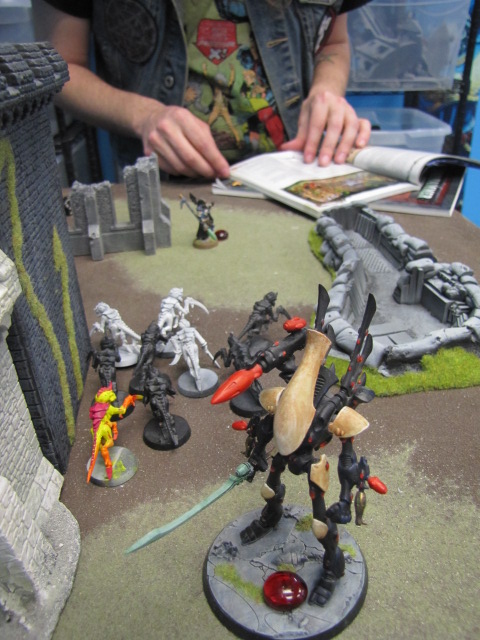 The Farseer fails to die, but also fails a morale check after the combat and flees. There's no hope of winning this one now, and the rest of the guys have finally showed up. I concede! The abundance of LOS blocking terrain on this one really helped Zni get to me without many casualties, and I had some pretty bad rounds of shooting. Until next time!