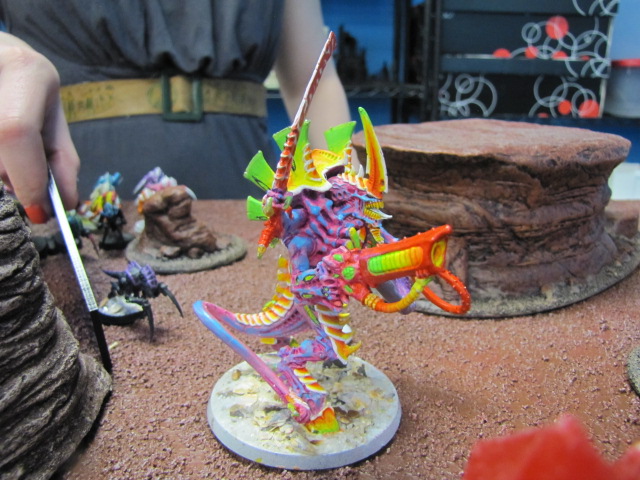 No battle reports from yesterday, but we got in three games on the red planet board to decide who will be "League Commissioner" of our new WWF-themed idea. We are planning on having a reigning champion with a "belt" like trophy that can be challenged for feature matches (resulting in good battle reports) while pairing other players up to see who is deserving of a shot at the title. Hopefully this inspires some Macho Man Randy Savage, Ultimate Warrior, or Hulk Hogan type talk around the games. We're also shooting around some ideas for integrating something similar to ladder matches, cage matches, and other weird events/handicaps for 500 point 40k games. But uh, Saturday... let's see... 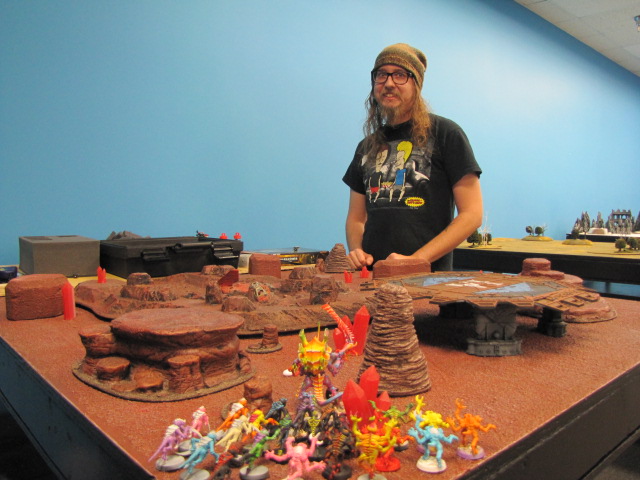 I look pretty goofy in this picture! Zni and I played a game as we ended up getting here pretty early. Despite having a free Skyshield Landing Pad on the board, I fail my first reserve rolls, and while I'm not paying close attention to the lady with multicolored Tyranids, somehow we both get confused after a combat resolution and she takes a second turn. I dunno what to do in this instance, after she gets like 24" of movement towards my dudes without me getting a response, I just conceded so I could get a game in against a guy who plays Blood Angels! 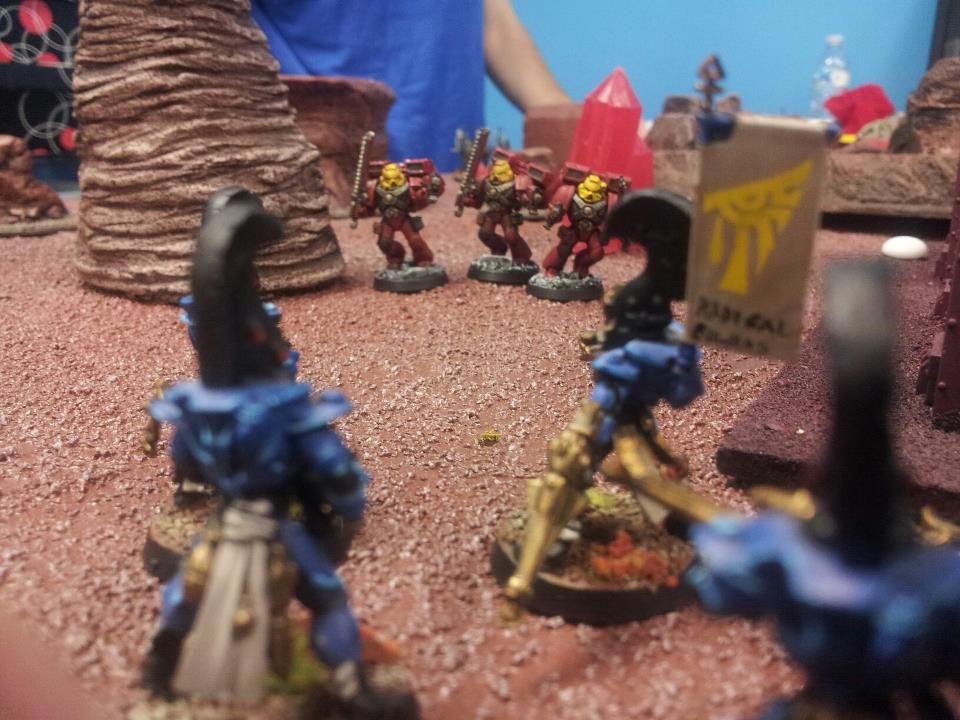 I play a pretty similar style of Blood Angels army myself, and knew that this would be an uphill battle. Missiles correctly targeted my Wraithlord from the start and eventually brought him down around turn three. I got a lucky series of shots against a deep-striking 7 man assault squad, but ultimately couldn't bring them down entirely. After getting a lot of guys mopped up and stupidly sacrificing the hawks at a slim chance of shooting up some power armor with lasblasters, I lost with my opponent holding 5 points and me only having a possibility of scoring 2 at the end of the game. Still a fun match overall, and a very nicely painted army, kind of wish I grabbed more pictures of it. 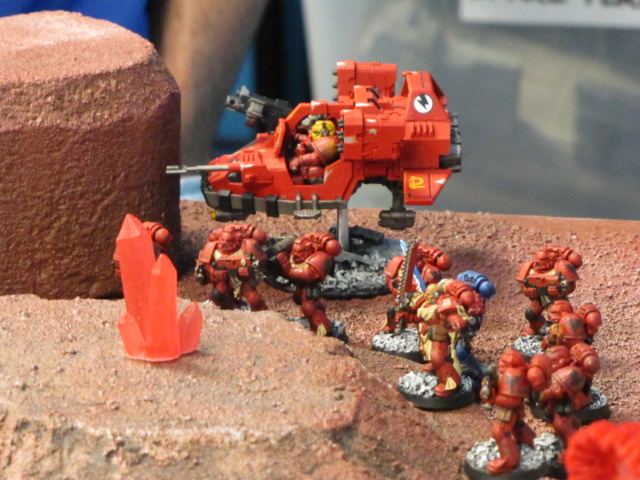 A lot of this was supposedly done with army painter and quickshade, whatever the case the results are great and it's actually a very balanced and fun 500 point list to play against. 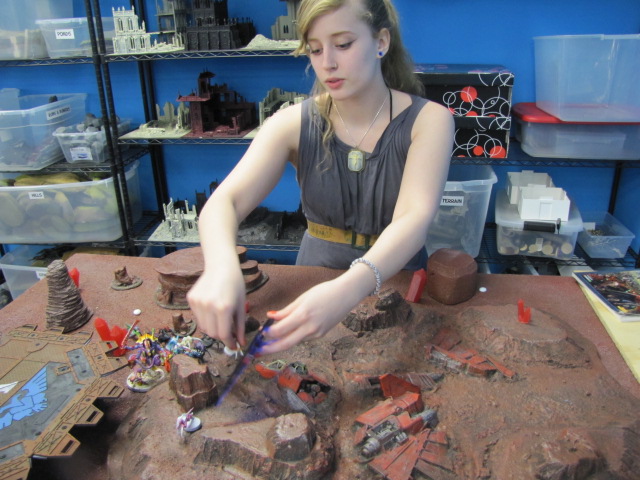 Zni's Tyranids are getting more paint on them. Give it a few more months... who knows what these warp-fiends might look like. 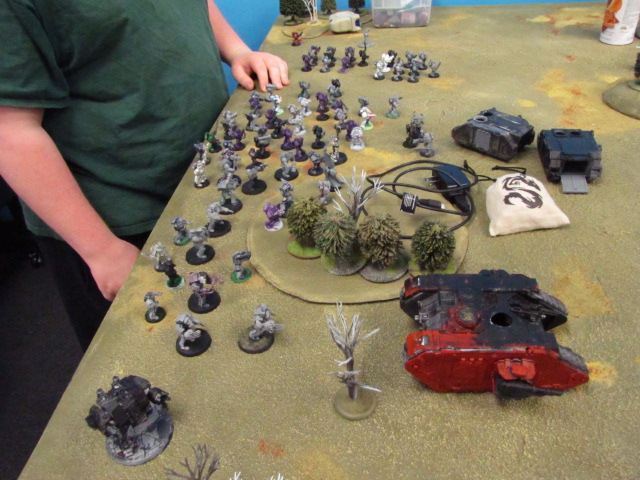 Of course, we aren't the only ones playing 40k here, and not all players are into the low points games. Some prefer to play large battles with entire collections, and yesterday a group came in and did just that, taking advantage of the autumn board. This is just a fraction of the heap of models seen in this 5-player game. I'm not entirely sure they even got started before I left, there was a lot of set-up involved for these guys, and lots of flyers and reserved tanks and troops on a separate table. 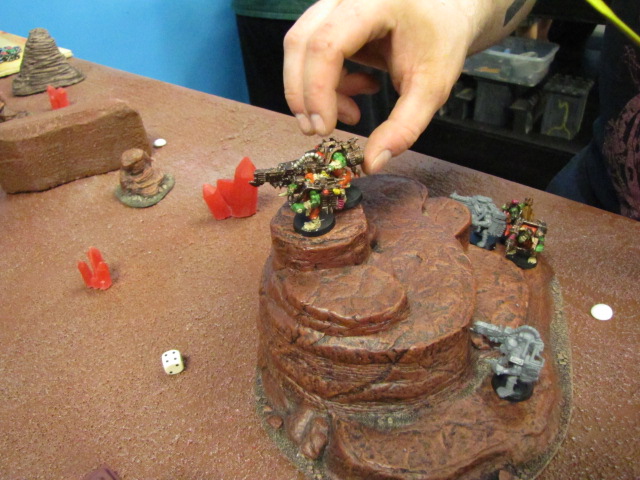 We finished off the day with a match for the title of League Commissioner. Kyle's been doing pretty well with 6th edition, and he decided to bring da boyz (Orks) with a pretty legit 500 point list. Some of the threats included Meganobz, Lootas, and Ard Boyz, all of which really packed a punch on Zni's Tyranids over the course of the game. 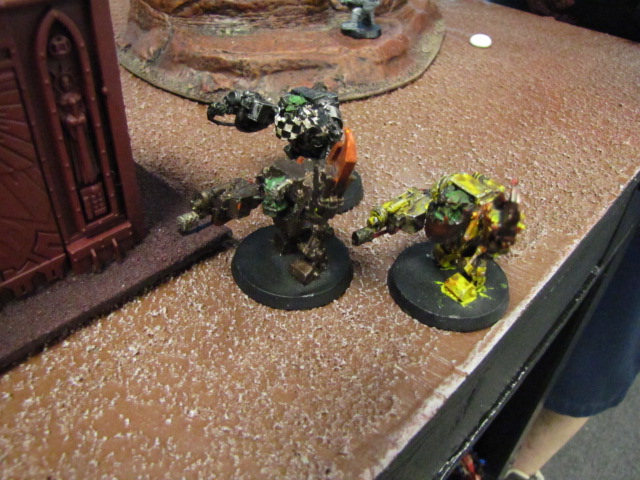 I was surprised to see that the Meganobz had little trouble with a squad of outflanking Genestealers. I thought rending would be a great boon to Zni, but the Meganobz cleaned up with minimal casualties and moved on. 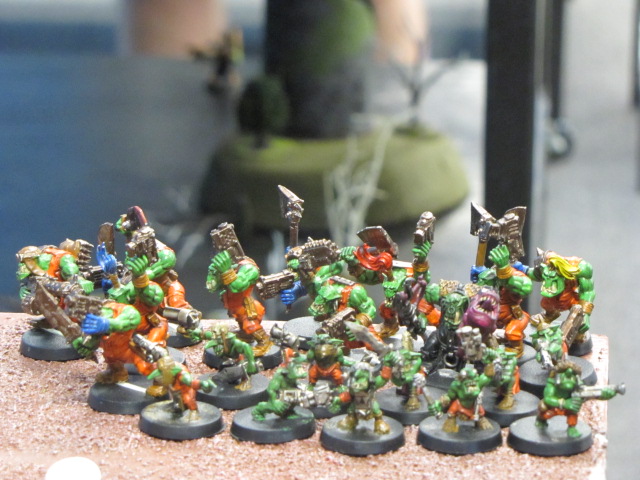 The addition of Grots from reserve allowed Kyle to conga-line two objectives with the same squad, as most of the 'nids were tied up in other places and couldn't force the little guys off. 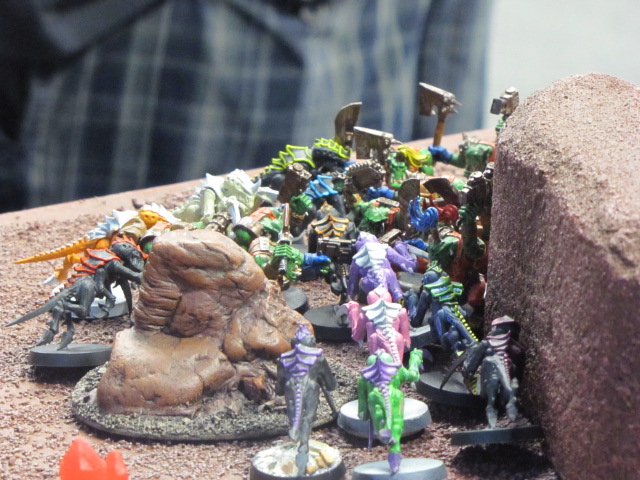 After one of the last massive combats in the game, Zni remained half an inch out of contesting range of an objective and had to throw in the towel. Kyle will be the League Comissioner and work out the first 'event' to find our league title-belt holder... and that champion will have to defend that title from newcomers!

I've been frantically painting some Guardians to try and vary my list up a bit. There is no painting requirement to game with us, but after fielding a fully painted army I really like continuing to do so... plus it makes the pictures better!

Thanks for reading, hope you enjoy the pictures!
Posted by Etna at 9:34 AM