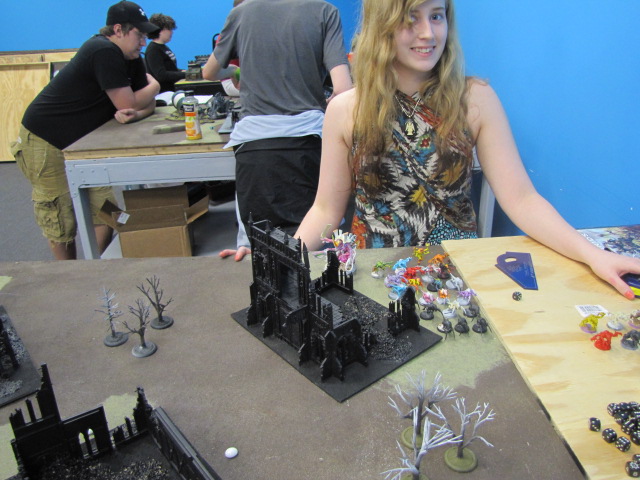 This Saturday showed a bit more success in our group. We had our four show up, as well as two other 40k players, one of which I got in a quick 500 point game with. Zni's army has quite a bit more paint on it this week, and I managed to finish up the Swooping Hawks and add some detail to my bases, meaning that this particular Eldar 500k force is pretty much tabletop painted! The mission we're playing, as usual, is Battleforce Recon, and the army lists are unchanged since this posting. 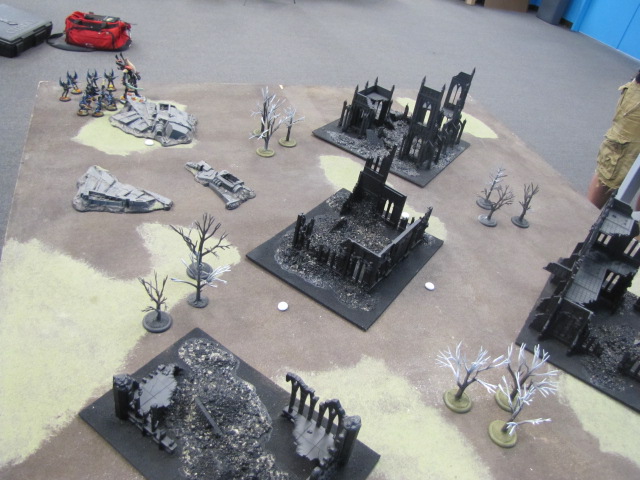 Zni's deployment can be seen in the first picture. In this one, you can see the four objectives -- the last one might be hard to see, but they're on three sides of the center building. I have an objective near the crashed aquila lander or whatever in the corner. I've kept a squad of Dire Avengers in reserve. 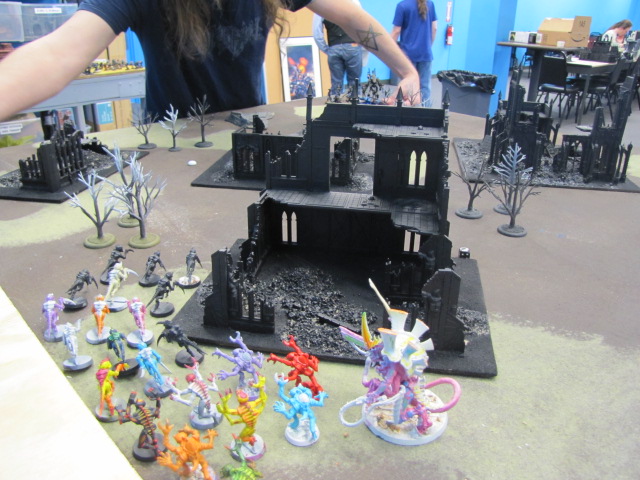 I don't get to steal the initiative. Zni's forces move forward and spread out a bit, fearing the blasts from the Wraithlord's Eldar Missile Launcher. She has a squad of Genestealers in reserve that will be arriving via outflank. The Hive Tyrant stays well out of sight, oddly enough. 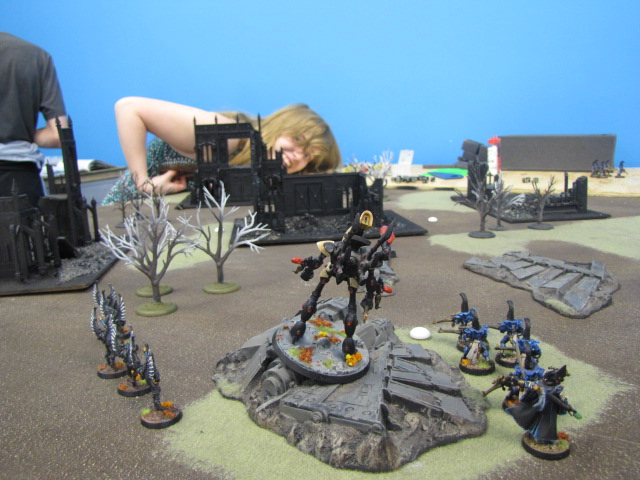 My first turn. I move my guys up, and put my Wraithlord on top of the wreck to try and see if I can get line of sight on anything. Well... nope! 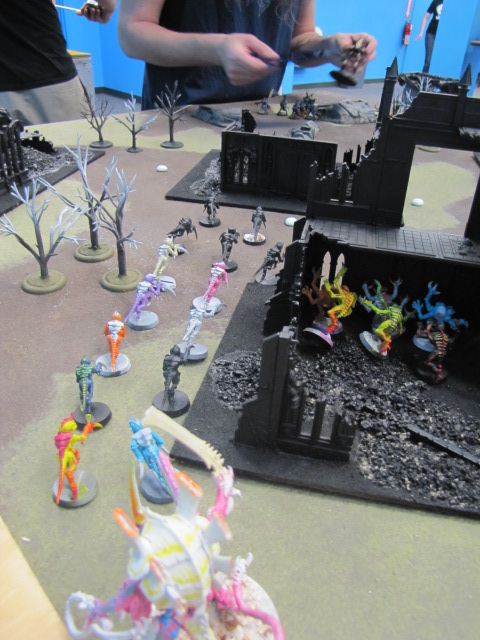 Zni's turn has her moving her Genestealers through the ruins (two of which make it past the building slightly) and her Hormagaunts staying mostly out of line of sight, spreading out in case of blasts, and moving towards that center objective. The Hive Tyrant pokes his head out and prepares to take some shots. 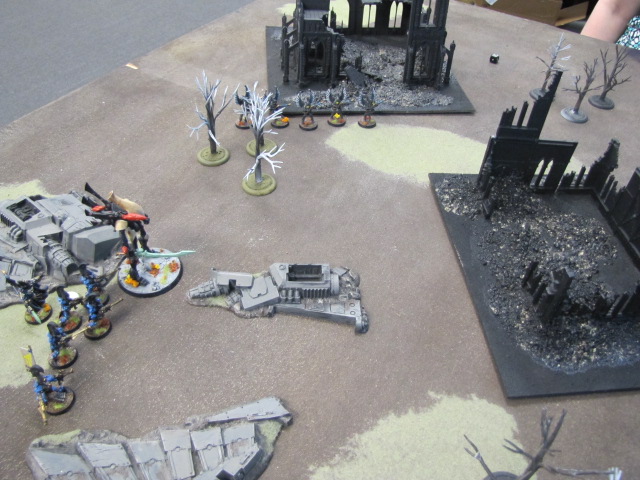 It's my turn two, and I advance forward, pressing the Wraithlord to get in closer first. The Hawks get in range to take some shots at the two Genestealers who have poked out of the building, scoring a kill, but no major damage. 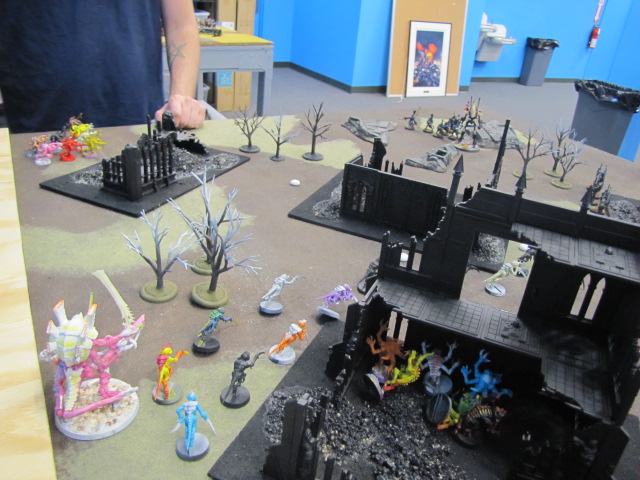 It's Zni's turn three, and she opts to keep the Genestealers mostly out of line of sight. The Hormagaunts stretch around the building to engage the Hawks, outflanking Genestealers pop up down the board, and the Hive Tyrant attempts to take a shot at the Dire Avengers, with no effect. 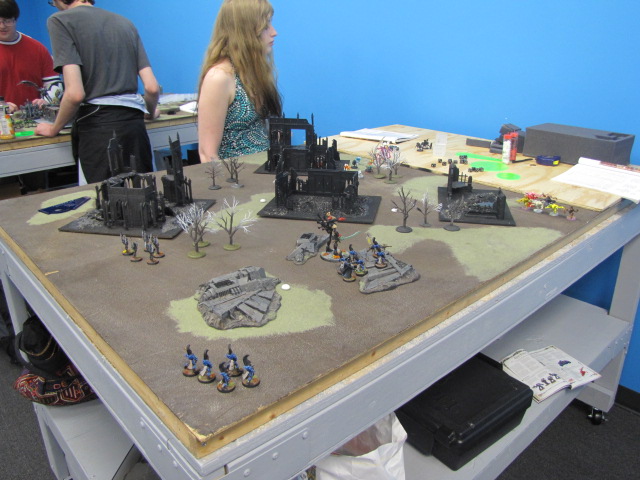 My turn three... I pull back the Hawks so they can't be charged by the Hormagaunts. My Dire Avengers come in from the back field, and my forward moving force positions itself just outside of charge range of the outflanking Genestealers. I really love being able to pre-measure in this edition! The Hawks inflicted a bit of damage on the Hormagaunts, but plenty pile in. 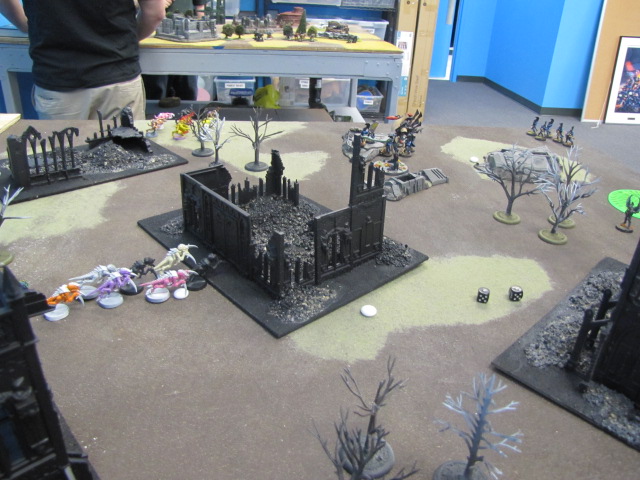 Zni's turn four. Outflanking Genestealers advance (the other ones are still hiding in the building) and the Hormagaunts pile in to try and deny line of sight to me. The Hive Tyrant is having some trouble getting shots off this game, and fails to place a blast on me again. 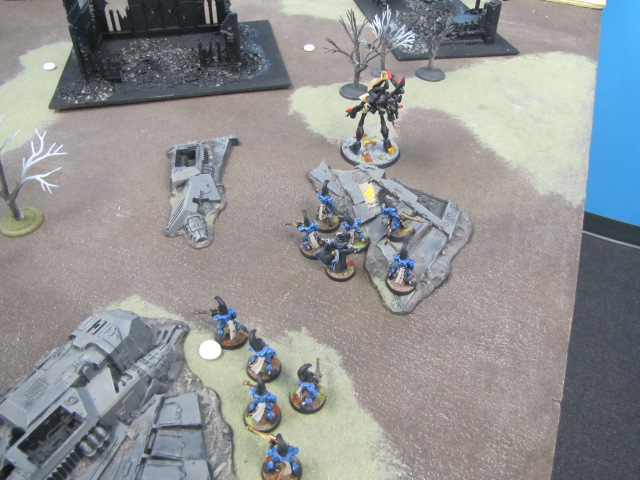 My turn four. I guide the Dire Avengers, doom the Genestealers, and manage to completely wipe out my would-be attackers with re-rolls to hit and wound. It's far above-average to roll 8 kills with ten shots, even with re-rolls, but I get lucky and score First Blood in one go. I've also managed to sit on an objective. The Wraithlord advances towards the Hive Tyrant and such. 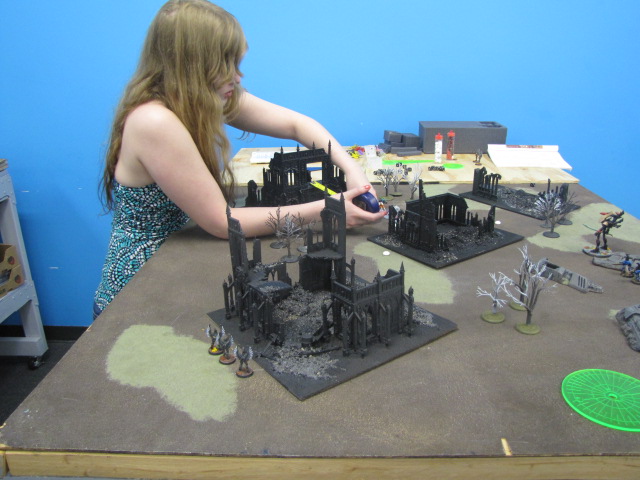 Zni's turn five. You can see I've started to take my Hawks around the long way. Zni moves the Genestealers left over through cover, and moves the Hormagaunts into as much cover as possible as well. Looks like she's trying to capture the objectives now. 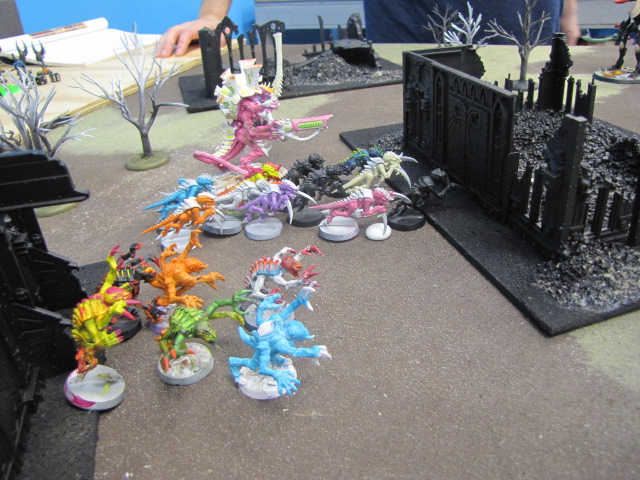 The psychedelic horde shambles forth on her turn, and the Hive Tyrant positions himself well to drop a large blast on one of my Dire Avenger squads. It hurts (four die,) but I pass morale and stay in the fight. 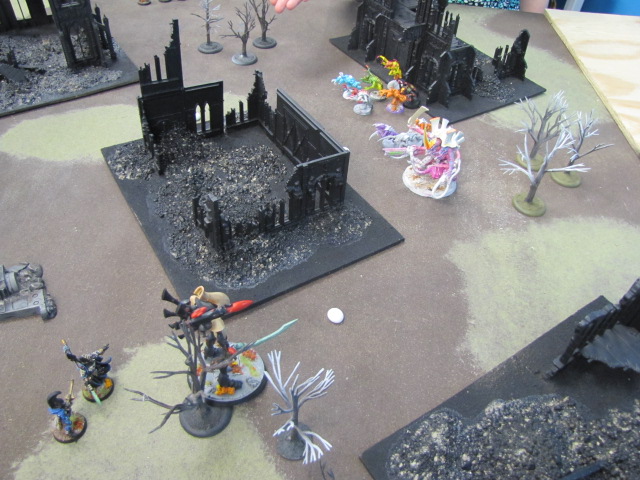 My turn five. I move foward with a wounded squad and a Wraithlord, intending on smashing in some Hive Tyrant face. Hopefully I can deny an objective as well. 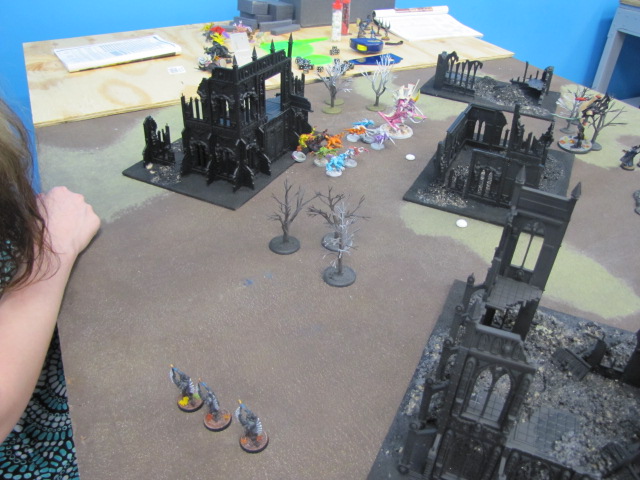 The Hawks elect to run down the back field. Zni thinks they're going after the Genestealers, but she won't know until next turn that I'm going after Linebreaker. You can see here that a blast from the Wraithlord has cleaned up all but three of the Hormagaunts. Zni's turn 6 has the Genestealers stretched out to meet the second objective on the far side of the building. She moves into to place pretty much everyone in range of that center objective as well. She controls two objectives, it looks like, but only has one or two guys in range of her 2nd objective. 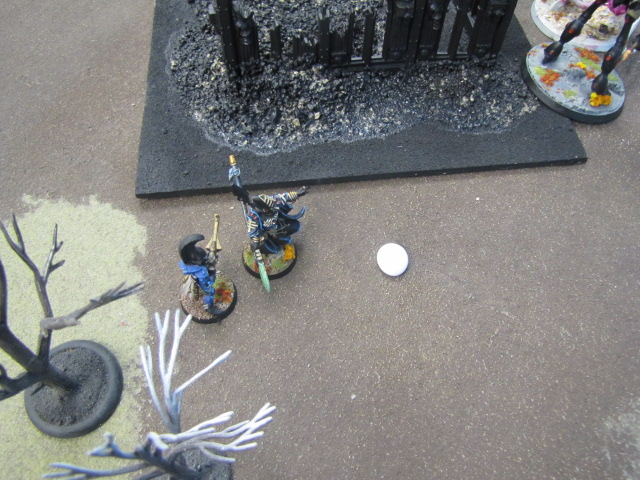 My turn six, I move towards a second objective token. The Wraithlord charges the Hive Tyrant, however, can't really tie up anyone else, or I believe get close enough to deny the objective. 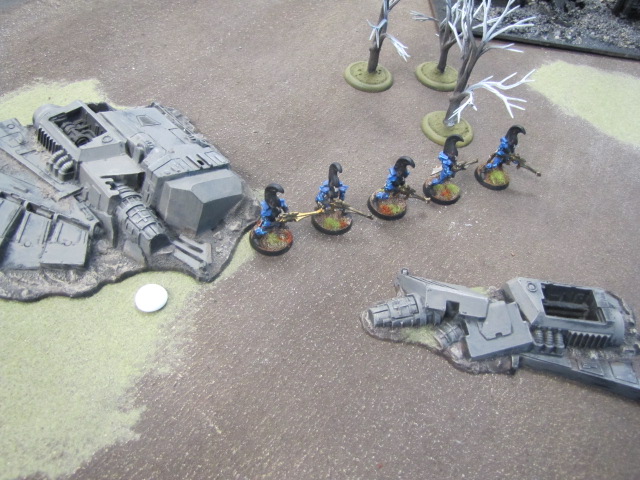 The Dire Avengers stretch as much as I can get them to while still controlling the objective. A lucky shot kills a Genestealer on the far side of the building, putting her squad just out of range of her 2nd objective! The Hawks run towards the deployment zone to score Linebreaker. The final score is 6-2 -- I have two objectives, Linebreaker, and First Blood. Zni has one objective under her control.

I learned some things after this game that I'd never thought of before. One, if you deploy the hawks from turn one, and skyleap during the first movement phase, they go back into ongoing reserves, not regular reserves, and will never require rolls. It seems a lot easier to get Linebreaker by simply deep striking into the zone rather than 'kiting' people around and making a mad dash at the end. I essentially had to forego two turns of shooting to get there, and I could have at least dropped some templates during that time.

Zni and I are now 1 and 1, we'll have to have a third match to see who the true victor is in this series! I plan on doing some more volunteer work to get the terrain and miniatures in better shape for future pictures. Hope you enjoy the report, feel free to leave questions/comments below!
Posted by Ed Vaughan at 7:57 AM