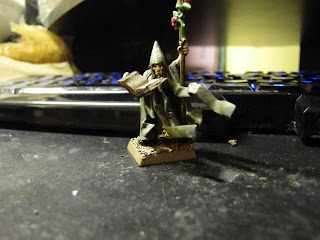 A while ago, I had been using my Mordheim Warlock for some introductory games of D&D (nearly all Warhammer figures work great for this, the bases are sized appropriately for 1" grids.) I hadn't really remembered the possibility of dice bowlers -- you know, the type of people who seem to inadvertently aim their rolls at the miniatures on the table. After quite a few knocks, I wound up losing the dagger hand of the Warlock, and it was nowhere to be found. I needed a replacement. Luckily, the Empire Battle Wizards plastic kit had more than enough spare bits, some even more appropriate than what he originally had in hand.

The book is my first attempt at that really small, scribbly style text that seems to appear on so many GW stock photos. I should also mention that his hand has this time been pinned using the Gale Force 9 pinning kit (the smaller of the drill bits, probably like a 1/32") and glued once again. Because I used this method, I also got to paint the book on the rod, away from the mini -- probably one of, if not the only time I've ever painted an unassembled bit. I tried to do a bit of staining on the pages by carefully manipulating devlan mud to stay on certain areas while drying. 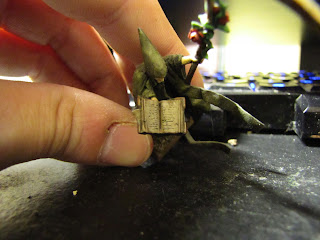 The cover of the book was a stain attempt as well, but I hoped to use Thraka Green and Leviathan Purple to try and make it look mildewed. Didn't work as well as I'd hoped. I'll post again when I get that technique to come out better.

The scribbles actually worked out pretty decent considering I have terrible brush control and a shaky hand. I guess these things are getting better. I am really considering purchasing those overhead jeweler's glasses -- my eyesight is really not up to par for doing such small work.

Overall, I think the Warlock turned out better than he originally was! I can't wait to use him in another game. The GW Bowie Battle Bunker in MD is having a Mordheim league Wednesdays and Fridays throughout April -- I am busy Wednesdays but I may just stop in Friday to try and get a game in with some new people!
Posted by Etna at 9:14 AM