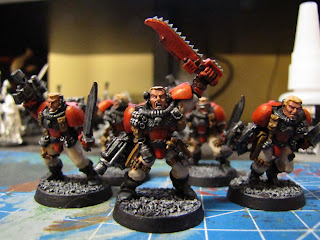 We're sort of getting ready for an eventual Kill Team game, and I wanted to at least have my miniatures for this painted up. I find I work best in small chunks like this or else I don't get anything done at all. All Space Marines, Blood Angels included, have trouble fielding a lot of models at smaller numbers, making Kill Team a pretty rough game when you're fighting horde armies.

Your choices are pretty limited here; you could take a 5 man squad of plain Terminators, but they will get swarmed. Zni's Tyranid army could field more than 30 models in a Kill Team game. Those are pretty rough odds no matter what dice you're rolling. The most models I could come up with is 11 -- two plain scout squads, and one 50 pt elite choice (either a Sanguinary Priest or Techmarine.) A full Tactical or Assault Squad is close to 200 pts as well, allowing you to field 10. I wanted to play something a little more mixed, and possibly more versatile though.

I wanted to have some long range fire, and Relentless Rage-filled Boltgun Marines sounded great for the pace of play. I needed something capable of dealing with larger threats, so a Thunder Hammer seemed interesting (I've never used a Thunder Hammer in any of my armies, just Power Fists.) The addition of a power weapon also helps to sink remaining points while hopefully cracking open a few more armored foes. So far I can expect to anticipate Space Wolves, Dark Eldar, and Tyranids as my enemies, and hopefully this will be able to take all corners. 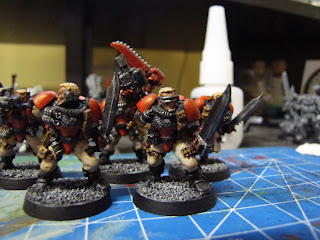 These are the classic metal scouts, before the newer plastics came around. I've had these since I originally started collecting back in 3rd edition, I just never got around to painting them. Due to Games Workshop re-doing the paint line, no paint guides were easy to find, and very few pictures of finished Blood Angels Scouts exist in Google's image search. Hopefully I can change that after this post... 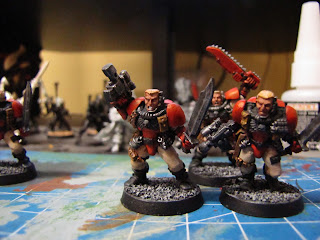 I've had some recent success on this color of cloth by painting it with Dheneb Stone and washing it with Gryphonne Sepia, which is quickly becoming one of my favorite of the washes. There's much to-do about Devlan Mud (now Agrax Earthshade,) but Mud often dulls the crispness of your paintjob, and at this point, is very noticeable in most people's miniatures pictures. I am becoming more and more amazed with different washing techniques, like using Wood Stain, which I may try in the future.

The basing on this I believe is "Moonscape," I really just wanted it to be quick Cityfight rubble. It's Gale Force 9 "Fine" grit, sprayed black with the rest of the model, drybrushed with Codex and Fortress Grey. The rings have been cleaned up with Chaos Black. This whole mini really is the last hurrah of GW's old paint line, as this weekend I've picked up a few new colors that will be slipping in... all of the new GW glazes, Eldar Flesh, Kindleflame, Troll Slayer Orange, and Fire Dragon Bright.

I have a few pictures of my assembled Death Company marines as well. I know many powergamers out there would think "what a waste of a box of Death Company," but hey, it's all to have some fun in Kill Team. 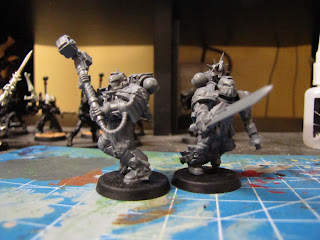 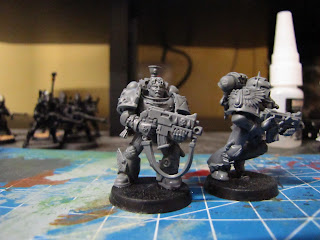 Thanks for looking! Comments and criticism about my painting, my writing, or my pictures are always welcome! :D
Posted by Etna at 1:29 PM