The "end boss" of Super Glues 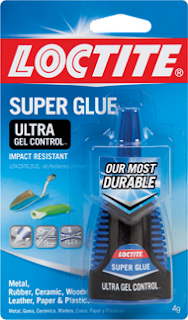 Originally I had started out using whatever Super Glues were available to me. It was a runny mess and often meant stuck together fingers and some glue on parts of my model that I didn't want. Occasionally I would find that I had glued something in the wrong place due to the fact that I had to hold it together for so long, and the small amount of slippage as it dried. I tried various methods to help this out, most notably using putty to prop up parts so I didn't have to hold them with wavering hands.

Eventually time would teach that a little bit goes a long way when it comes to quick setting, but it also failed to create a lasting bond, even with products like Gorilla Glue, that are supposedly better than other super glues. I had heard a little bit about Loctite, but it was only here and there on forums like DakkaDakka. Nonetheless, I kept an eye out for it, because usually when I looked in a Super Glue section, Loctite was sold out.

I got my hands on this recently, as well as getting my hands on my first ever Finecast model -- the new Empire Witch Hunter. I've used it to repair a few metal miniatures that have had breakage. This holds better than any glue I've ever used, sets faster than any glue I've ever used, and since it's a gel, doesn't create a ridiculous mess! It's about the same consistency as GW's "plastic glue thick" which makes it very easy to control out of the nozzle. If you're having glue woes, keep an eye out for this, it's a hobbyists dream.
Posted by Ed Vaughan at 9:24 PM

Email ThisBlogThis!Share to TwitterShare to FacebookShare to Pinterest
Labels: modelling