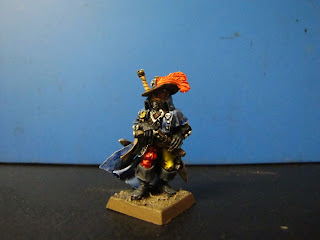 Here's the result of a Saturday spent painting. An Empire Witch Hunter in Marienburg colors, now to be my champion for Mordheim. I used several new Citadel paints for this, and the mini is more or less the products of various experiments with glazes, washes, and the new texture paints. Read on to find out what I used.

I started this miniature by basecoating it with Skull White. There were no issues with paint adhesion, so it is true -- Finecast does not need any washing prior to paint. It seems to have set on the miniature well. The white primer really helped bring attention to a few air bubbles that I didn't find previously, as well as casting supports that needed to be removed. It was too late in the game for liquid greenstuff (or rather, I was too impatient) so some of the bubbles still exist, barely filled by glopping them up with paint. However, I would still consider this a good cast overall.

One of the things that is different about painting finecast is the 'slicing' of the brush that you have to do. Areas, like between the gloves and the shirt, or between the boots and the pants, are really deep, requiring you to get some of the oddest angles in order to achieve good coverage on the white basecoat. Washes certainly help tremendously with trimming the edges, though you can still see a few areas that I've missed, looking at the larger-than-life photos. End result, though? I still would buy Finecast again.

On to the new GW paints. The mini started white and I wanted it to be different than the stock GW photograph, mainly because he's a Mordheim mercenary from Marienburg. Experiment number one -- tint his jacket with Guilliman Blue. It'll be great, right? After the first coat I've realized my folly... his coat looks too much like denim. I now have a Canadian Witch Hunter. Additions of Asurmen Blue wash and more tints bring out the color, but the glazes don't seem to want to sit on the edges, resulting in a natural highlight that's a bit too bright for the cloak. Interesting, and although I'm not blown away by the resulting color, I'm not unhappy with it enough to change it. 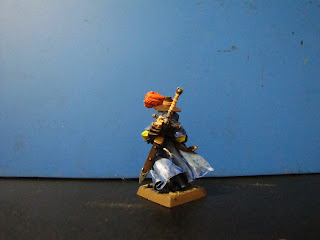 The feather has been coated with the red glaze, Bloodletter. The coverage is great for this purpose, it doesn't recede off of the topmost areas, and it colors the feather well. What you can see from the photos is real, Bloodletter is quite orange and pink in color. Reminiscent of grapefruits. I am most impressed by the performance of Lamenter's Yellow glaze, which, on the pants and the shirt, gave me one of the most striking yellow tones I've ever achieved. Lamenter's Yellow over Skull/Ceramite White will be my combination for bright yellow every time now.

I picked up two texture paints recently -- the one I used here was Stirland Mud. One thing to consider with the new GW paint pots is that they make the paint inside seem lighter than it actually is. From the outside, I expected this to be suitable to match my other Mordheim guys, and in reality this paint is far darker than I expected. It covers well. It appears to be similar to a thinner foundation paint with fine grit suspended in it in a paste-like form. It dries in 30 minutes or less, and is much flatter than using any basing grit, including GF9 "Very Fine" grit. In order to bring it up, I drybrushed the top heavily with Graveyard Earth, then Bubonic Brown, then Bleached Bone. It's rimmed with Graveyard Earth to match the rest of the warband. 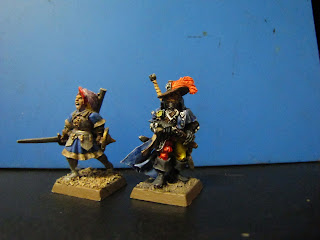 Here's a shot to show you the differences in basing. The model on the left I used GF9 "Fine" grit for. There is a lighter colored brown texture paint that I'll have to pick up to see if it's a closer match. Also, for comparison, the model on the left was colored using Enchanted Blue, while the right was colored using Guilliman Blue and Asurmen Blue over a white base.

Texture paint is a little weird getting used to. I pulled some out on a palette knife so that I could gauge how much grit I was getting. I had to dab it repeatedly to achieve a stucco effect to ensure that I would get a decent amount of raised grit all lover the base. It's not messy, and it's easy to slide along into nooks and crannies on the base. It takes well to drybrushing and comes in colors that you'd want. Seems very good to me. I will definitely be using more of it.

I'm happy with the new glazes as well, particularly Lamenter's Yellow and Bloodletter. I'll have to work more with Waywatcher Green and Guilliman Blue before I can give a solid judgement but they seem to have their place as well. Overall the textues and glazes are very good buys, and I suspect they will be selling as fast as Devlan Mud and Badab Black when the word gets out.

Now, if you'll excuse me, I have to get back to watching my new "How to Paint Citadel Miniatures" DVD...