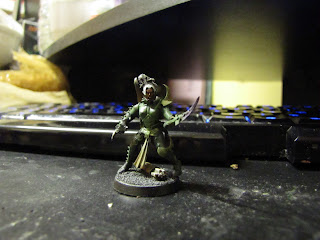 Let this be a cautionary tale to weathering powder noobs. What you see here is ultimately the end result of a mistake which caused my model to turn green. I liked the idea of possibly being able to use Vallejo Pigments as a weathering powder, and wanted to add a little bit of green oxidation to the brass pieces of the armor.


I take a nerd (Willy Wonka Candy) sized piece of pigment clump out of the container. Looks easy enough; I just bought a stippling brush, and these pigments, and I wanted to take a shot in the dark. I dab the stippling brush into the pigment, and look around -- no way am I risking my Eldar, my Blood Angels, or my Marienburg mercenaries. I do, however, play a little D&D, and wanted to make a model to represent a Drow Rogue I've been playing. Wyches seem like the perfect base to do this -- they have very little that actually represents a Sci-Fi theme on the model.

Having subtly highlighted the armor folds in a way that would make them appear as if they were... magically enchanted leather instead of futuristic chitin, I applied bronze and gold to areas common to the Dark Eldar paintjobs. The kneepad stands out a lot and so does the shoulder pad, so they were obvious choices. Dark Eldar look greyish, but Drow in D&D are sometimes portrayed as brown skinned, so I thought this would be an interesting way to gauge this style for when I start the army.

Applying a base of Astronomican Grey to the sword, I washed it with Leviathan Purple (some of which still shows, and actually looks pretty cool with the green IMO.) The basing is "Ash World," that is, Codex and Fortress Grey drybrushes.

Back to the stippling brush... the first dab I put on the belly area, attempting to spread it on the gold area here. A big clump of green is left on the model. "Uh oh..." I'm thinking, trying to get pigment off of the short stubby stippling brush so I can hopefully grab some off of the model. The end result? Green pigment powder everywhere, and it spreads far beyond the areas that I wish on the model. I'm now breathing in a green cloud, but I've managed to spread the Vallejo Pigment around on the entire model to at least give it a smooth appearance. This stuff is STRONG and doesn't take well to brushes on its own. Maybe this isn't a good weathering powder -- or maybe it isn't intended for weathering at all. :|

I'm not too concerned with cleaning it up, although I would like to know how for the future. This model is intended straight for the gaming table, and I do not need to impress. The problems I faced would likely not be as glaring had I been painting say, a boxy Imperium tank. This pigment is just hard to work with in tight areas, with fat brushes. In a game of fantasy and imagination, Vallejo Pigment is now color coding for "Magic Armor" on the D&D table. :)


The Wych sprue does not come with an unarmed hand, so I had the choice of a Hydra Gauntlet, a Gun, or a Net. Obviously the gun is out, as I wanted this to look more fantasy than Sci-Fi. The net was rather large, so I just decided to go with the Hydra Gauntlet. It's a little more over the top than I would have liked, but beggars can't be choosers? The dagger/short sword hand was perfect for representing the kind of magical item that the character is wielding.

As you can see from the rear view, this model is loaded to the teeth with gear, as the character is in-game. A bow, quiver of arrows, rope and satchel are all found on the Mordheim accessory sprue and help bring the fantasy motif to life on the model. Note that I had to clip off what I assume are "respirators" on the back of the wych in order for the backpack to fit on snug.

I'm really looking forward to the new Citadel paint range. Also, I am officially afraid to try to use Vallejo Pigments on any of my models now. Be warned! Not as easy as it looks! Also, this is the messiest thing you will ever do to a model or your desk... period.
Posted by Etna at 5:36 PM