My first Finecast (and some WIP shots) 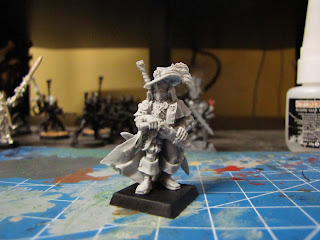 I've been pretty apprehensive about purchasing Finecast -- and rightly so. There are still claims by the bucket of returns and exchanges of Finecast products. However, I was quite compelled by one of the latest Empire Finecasts, the new Empire Witch Hunter, so here goes my first foray into GW's new material.


I've never bought a Forge World product in my life, nor worked with any other resin miniatures, so this is quite new to me. I made sure to read up about resin in general, though GW's big claim is that Finecast is different. Finecast doesn't require washing, is made of non-toxic resin, and boasts higher detail.

Now, I can see where the detail claim comes in. Metal miniatures commonly sported "fill areas" on the underside of arms, tabards, guns, etc. because you couldn't cast from underneath. Picking top or bottom usually meant that your detail was on top, which was fine, because most people don't ever look at the miniature from the base (i.e., looking at the mini's crotch.)

Finecast, being a re-cast of old sculpts and allowing a lot of leeway on newer sculpts, boasts some pretty nice detail from the underside of this model. It's completely necessary, too; I don't think you'd ever see the sculpted detail of this guy's pant leg under the armor if this were a metal miniature. So I'm quite pleased with the quality of the work. I didn't get poisoned during the cleaning process, so I'm going to guess that the non-toxic claim is good as well. We'll have to see about the "no washing required" when I spray this guy later.

Now, a lot of Finecast miniatures have air bubbles that needed to be filled. I couldn't necessarily find any on this guy, but I have bad eyes. He has two options for gear on his back -- both options sit on a bump on the mini's coat (the mini is one piece, except for the sword option on his back.) In the one that I almost bought, the greatsword was warped, along with the rest of the sprue. On this one, I found a tiny problem with his other back option, where the resin had sort of 'fallen out' of the dent that connects with the bump on the coat. This creates a hole that isn't impossible to fix yourself. I didn't even use this part, so it didn't matter at all to me. 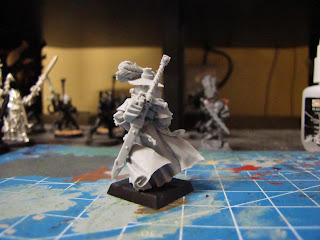 In this second picture you may notice a sliver in the coat that is unformed, resulting in what looks like a tear in the coat. I debated on whether or not to pull out the Liquid Green Stuff, but decided against it. This guy will be a seasoned veteran of Mordheim (and a champion of Marienburg) so tears in his coat should be inevitable, right?

I'm overall happy so far with the Finecast, and it helps a lot that you can look inside the individual blisters before you buy them. I am still a bit concerned about buying Finecast boxes (for instance, Fire Dragons, Swooping Hawks, Howling Banshees, and Striking Scorpions, all of which I look forward to adding in the future.) I think I'll just have to deal with it though.

I leave you with a picture of what else is on my table, ready to be painted and added to my Marienburg mercenaries... 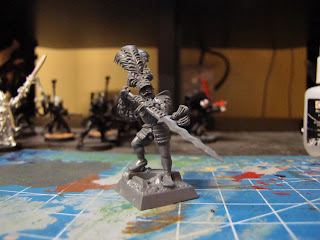 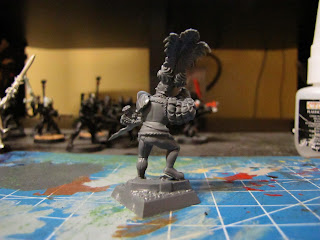