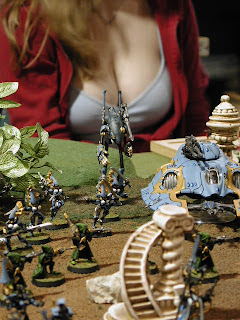 This interesting little tidbit comes from Warseer's "DrBored," and I figured I'd really like to highlight the rumors pertaining to the rest of the 2012 Games Workshop release schedule.


I got a rare opportunity to ply a wealth of information for some knowledge and insight about what's coming up next/soon.

And somewhere in that mix is going to be a splash release of fliers that *should* include the Harpy, Voidraven Bomber, Doom/Night Scythe, and possibly more. When I mentioned 'Autumn of Fliers' I got a derisive snort, so we may see it sooner, we may see it later.

This confirms two things:
1. It's not going to be Dark Angels and Chaos for the Starter Box. GW is NOT going to put two power armor armies in the same box. Power armor is their bread and butter, and to put two power armor armies in one starter box doesn't follow any trends, going back to the Rogue Trader days. It *may* be Dark Angels vs. Tau, but my source suggested Eldar strongly for several reasons.
-A. Eldar is a girl-getter. It's the one army that attracts more girls to the game than any other.
-B. Eldar is currently the worst selling army.
-C. Eldar has a massive loyal fanbase.
Eldar are the logical step, and now they're the rumored next step in this coming Xenos season.

2. Chaos is not going to be coming out this year, but may be slotted for early 2013. This is good and bad... bad because we don't get Chaos sooner. Good because it means Chaos will be a true 6th edition army, and not a 'made for' 6th edition army. This will put more time between the release of the rules and the finessing of the Codices, which means a better 6th edition Codex for Chaos. We could, of course, get a surprise, where they slam in a new Codex into the year, but that doesn't trend either. My source suggested, however, that we may see a lot of 'splash' releases packed in, with the aforementioned fliers being one.

As for my source, of course I can't reveal him. It'd be a plain disservice to his trust. What I can say is that he is a wealth of knowledge about all things GW, Forgeworld, and Black Library, and has many contacts therein (and I don't mean GW store managers. I mean Codex and BL authors, and GW and Forgeworld sculptors).

I would be very surprised if I was proved wrong by the passage of time and the developments therein, but such is the nature of the future. Take it or leave it, but I'm confident that you shouldn't have to take too much salt with this.

This tickles my fancy in a number of ways. One, it gives me a great reason to use the above image of a *cough* great looking Wraithlord and other Eldar models. Two, I really want Eldar to be in the starter box. I've loved Eldar since I started the game in late 2nd edition. Three, this completely slaps the "Dark Angels vs. Chaos Space Marines" rumor down... and I thoroughly hope that to be true. The last thing I want to see is a starter box that encourages more Marine vs Marine play. 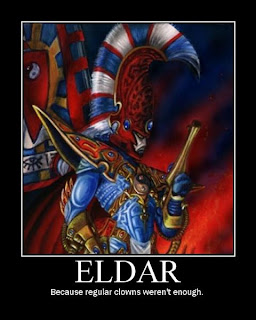 I was just thinking today about how many girls play 40k. My girlfriend plays (Znijurru -- the other contributor to this blog!) although I feel like I conned her into it. There was a female manager at the Arundel Mills store who I presume played... or probably had to play, as a GW employee. Other than that, on my infrequent trips to the Battle Bunker and popping into my local independent game store, I don't think I've ever seen a girl playing Warhammer. This would probably explain some of the incredulous looks Zni and I get when we pop in for a game somewhere.

I find it hard to believe Eldar is the worst selling army. I'd think that position would be reserved for Tau or Sisters of Battle. The Eldar range does have horrible pricing points though... $150 US for a ten-man squad of Wraithguard, tanks that start at $41 rather than $30, and a number of models in the line that currently aren't worth fielding (therefore, not worth buying!)

The only statement here that cannot be objected to is the comment about Eldar having a "massively loyal fanbase." The current Eldar range is great, the older range is good to great, and many people the world over love the Eldar (or have loved it at some point.) Many players have moved onto marine equivalent armies (namely Wolves, Blood Angels, or Grey Knights) but still retain a love for modelling and painting Eldar in the meantime. The blog-o-sphere certainly represents that.

Let's remember not to get our hopes up too high... other rumor mongers have claimed that Eldar is not slated to be re-done at all this year, and this rumor is claiming on the contrary that Chaos will be the one pushed aside. Let's raise a glass to Dire Avengers one way or the other, and bladestorm while we can!
Posted by Etna at 3:48 PM