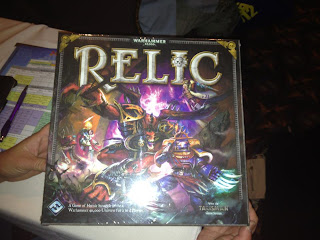 Announced at the GAMA trade show yesterday, my FLGS Games & Stuff has revealed Relic, the upcoming 40k version of the old board game Talisman. It doesn't have any official information on the Fantasy Flight Games site yet, but my FLGS has assured me it's real.


We'll see if the components are compatible with 40k in any way, as I was under the impression that FFG couldn't really use GW's miniatures due to legal issues.
Posted by Etna at 4:57 PM

Email ThisBlogThis!Share to TwitterShare to FacebookShare to Pinterest
Labels: 40k