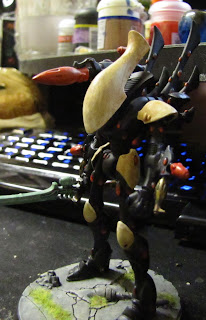 I've been working on this Wraithlord for a while and for the most part I've agreed to be done with it. I want to add the blue highlighting onto this guy to tie him in to the rest of the army, but he doesn't really have any hard lines, and I have very unsteady hands. This is my most recent attempt at painting bone, as well as an attempt at using the 'discolored barrel' found on the FTW blog.

The barrel coloration is hard to see, even in good lighting. The gold does not take nearly as well to colors as GW's silvers do. Also, I'm not entirely sure, but I may have gotten the coloring backwards, as I wasn't looking at the guide when I attempted to do this.

The bone this time is my best attempt at using Gryphonne Sepia in conjunction with Skull White and Bleached Bone. It seems well enough for my tabletop standards but I wouldn't write home about this.  Covering large smooth areas of multiple paints has made the end texture undesirable despite thinning my paints quite a bit. I think the problem of the result here is my lack of proper execution, and too many attempts to get a better look.

The basing was fun, although the color of the base does not really match the rest of the army so far. I may have to do further work to tie the colors in better. The sword is the only thing I'm happy about. 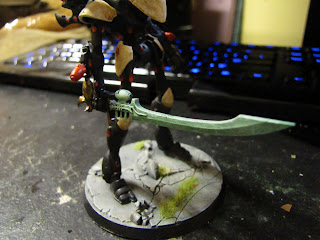 I worked for a while to get a good effect on the swords for this army during the Farseer's paintjob. I settled on this, which is a base of Astronomican Grey, washed with Thraka Green, Drybrushed with Skull White, and washed again with Thraka Green. I think this guy could benefit a lot from the new paints coming out (as I'm sure everyone's heard by now) but for the moment, I have to stop focusing on him. Either that, or go insane. I have a lot on the table right now -- plenty of Guardians, Warlocks, Dire Avengers, Wave Serpents, Blood Angels Scouts, Fire Dragons... even more awaits priming and/or assembly.
Posted by Etna at 2:03 PM