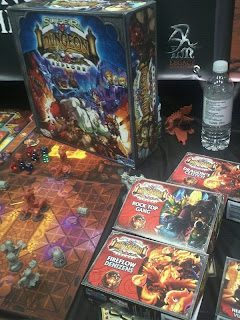 Leaked on Dakka by inquisitorlewis, Super Dungeon Explore had a showing at GAMA revealing new monster boosters, as well as some totally brand new monster forces presumably in the works.
The boxes look like boosters of the minis included in the base game, and presumably are about the same quality. The assembly style of these minis is very similar to the tetris-piece-in-hole assembly of the newer Warmachine plastics... except the joins are even poorer. At least on the base game. We'll see how these minis work out, hopefully they won't need as much greenstuff and trimming as the previous ones.


I own SD Explore and played a game or two when I first bought it. It's very board-gamey... well, if you took the old arcade games Golden Axe and Gauntlet and smashed them into a board game together with SNES RPG influenced hero models. They minis feature very smooth plastic surfaces for painting, giving you a lot of room for freehand to manipulate perceived textures. Overall, however, I don't like the game enough to complete painting the entire set, and have mainly moved on to using the minis for D&D.