Musings on yet another Dark Eldar launch 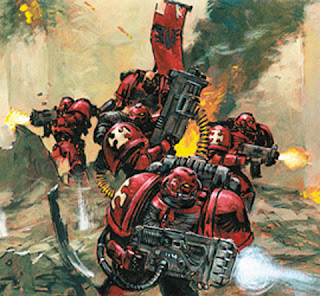 I've been thinking a lot about the latest GW releases. Not because I'm a Dark Eldar player - although I do have a box of wyches, Lelith, and an Archon. No, I've been thinking about them because it's a rare moment in GW's generally wishy-washy release trend. Yeah, this will be one post amongst many on the blogosphere that criticizes GW's policies.

You see, Zni is a Tyranid player. In assisting her on learning how to play Tyranids, I've noticed that the codex seems built around a number of missing models. Mycetic Spores and Tervigons come immediately to mind. These are discussed all over the internet and yet no good, universally legal models are available for them. Even Eldar suffers from a lack of proper GW components or kits -- Jetbike Farseers or Warlocks must be converted. Good luck learning how to turn your sorry excuse for a greenstuff 'dress' into a properly sculpted art piece in a reasonable fashion...

The Dark Eldar range really is huge, with every troop being represented by the current range, and most vehicles able to be wholly built or converted from kits. All characters could use sculpts, but overall these can currently be substituted by recreating them with available parts. And boy, are parts available for these guys. Pretty much every wargear option possible is represented in plastic for you to build whoever you want. They are the new Space Marine when it comes to kitbashing.

Eldar do not share this luxury. We've got outdated jetbikes (the riders are 2nd edition Guardians, and they don't even come in packs of 3.) Our Storm Guardian squadrons only come in boxes of 8, with legal squad sizes of 10, mixing metal and plastic components. Our aspect warriors do not have interchangable weapons. Our range can be slightly kitbashed with parts from Guardians and Dire Avengers, but just barely. Most models in the range are metal, slowly shifting to Finecast. I can't complain though, we've got every Phoenix Lord sculpted, a plethora of Avatars to choose from, and plenty of vehicle cheese.

What I really hope for is that the $15/pop Wraithguard get repackaged in finecast to a 30-50 dollar 5-model squad. I'd love to play with these guys but $165 for an 11 man squad is too much for me. That's like three tanks! Or a tank and a fully kitted out squad!

It's good that they are finally sticking to their guns though. Dark Eldar are a great army after the re-design and are mostly complete in terms of the model range. We'll have to hope that our armies get the same treatment eventually too!

I also wanted to talk about how much I think everyone should play Mordheim.

This game is amazing. Literally everything it was and stood for. Originally 60 bucks, this thing came packed with 2 warbands and plenty of terrain for a game. For 60 bucks! Nowadays the box is out of print, and if you're really wanting the full experience you can find an old box on ebay without a doubt. For those not wanting the whole 'collector's/vintage' deal, the rules are now available online FOR FREE from specialist games. Although the color sections have been removed from the rulebook.

A warband starter with metal miniatures (i.e. Witch Hunters, Sisters of Sigmar, Undead, Carnival of Chaos, etc.) will cost about $40-42 in the US. Compare that with starting an army in GW's flagship games -- a $90 army box investment and $15 at least for a Captain of some sort. For those armies with a current fantasy miniatures range -- like mercenaries of all kinds and skaven -- you can get into the game and nearly max out your warband for $35! The original Mordheim sprues have been reprinted as larger unit boxes for the Empire and Skaven - Free Company and Night Runners respectively.

The game plays faster than 40k, and is very similar to Kill Teams in 40k. Mordheim has continuity - your roster evolves as heroes and henchmen die, lose limbs, gain blessings and equipment, etc. over the course of many games. New players can join in and still perform well with a multitude of missions emphasizing different approaches and tactics.

There's also so few models to paint that you can really spend a lot of time getting them looking nice. Or you could not spend a lot of time at all... and still get your army fully painted! Most minis will be able to be used in GW's other games too, so it's sort of like a dual investment.

I'll probably be talking more about Mordheim in the future still, and will try to post some battle reports. We have a lot of terrain for Mordheim and our warbands have been progressing nicely. As for now it's time to head out the door!
Posted by Etna at 10:38 PM