Defeat at the hands of terrain! 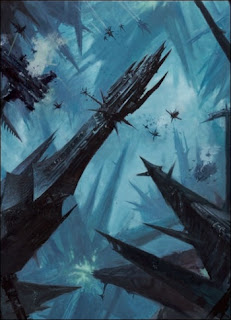 40k is a game is drastically defined by how much terrain you use. Tournaments are renowned for having few pieces of Line of Sight blocking terrain and very few area terrain pieces. Home games can often have more pieces of terrain than you will ever see, even in stores. Personally, I like to play with a "medium" amount of terrain, but I also enjoy cluttered cityfights. These places are chock full of nooks and crannies to ensure you have tactical advantage over your opponent.

Why am I talking about terrain? Well, yesterday I noted that I would be basing my Mordheim ruins today, and man, have I been beat. I did succeed in stocking up on materials, but between gluing on tiles, sprue rubble, and copious amounts of sand, I don't trust the bonds well enough yet to withstand painting. So, the first pieces will hopefully be revealed tomorrow.

Terrain can be a real pain to design, build, and use effectively in your matches. You want to take into consideration when building your ruins various model heights -- Mordheim ruins for example are not tall enough per floor to allow a Rat Ogre into a building (most of the time.) The same can be true of 40k heights and your Dreadnoughts, Wraithlords, Jetbikes, et cetera. You also want to take into consideration whether or not you want tanks to be able to squeeze between buildings in certain positions, or even inside the building itself.

You also want to take into consideration the overall height of the building for the purpose of defending those on the top floor. Will it take models multiple turns to move up to where my squad is located? If playing Mordheim, will I easily be able to get a drop-down attack on my opponent if they're trying to climb to where I'm at? Snipers are best stored above 12" if possible, preventing them from an early wipe by a jump pack/winged assault squadron. Not building platforms for the way up can help protect infiltrators, as it will be nearly impossible (or at least impossibly confusing) on how to get an assault onto your small (but tall) sniper platform.

I recently scored a small victory in a Mordheim game against Zni due to use of terrain. I had pretty much taken advantage of a doorway of a building that was only 3 models wide. Blocking the doorway with screening/tar-pitting warriors allowed me to even our numbers effectively; I would not be overrun by her Skaven horde (It's really grown into quite the army!) The tactic is similar to that seen in the movie 300 where the Spartans hold a small pass. Making a valley cliff as seen in that movie would be an awesome piece of terrain that I may build in the future (for tactical and scenic purposes.)

Take advantage of small valleys/channels/alleys and try to create terrain situations on your boards that allow your resilient troops to really shine without fear of being overrun. All "Death Star" units operate well in this fashion. A full Ork mob can bring 120 attacks on the charge if you do not use terrain to your advantage to prevent it! Often, they will get nowhere near the 120 due to constraints on being close enough to the enemy. Fences, walls and barricades work wonderful for this, but in your next game, try putting two large buildings side by side with maybe a 2" gap between them. You will find this is an excellent alleyway to fire out of and then retreat to a HUGELY defensible position, with no tanks being able to follow you and likely no more than 3 models getting attacks against your squad.

If you're into making or playing with terrain, you'll definitely want some area terrain. A patch of hedges, swamps, rivers... something that will slow models down. Over the course of a 5 turn game, a standard model can move up to 60"... the board is only 48" across. You want to hinder this with difficult terrain. You also want to make it hard for your opponent to deep strike where he wants to. Penalize jump packs, jet bikes, and skimmers with extra mobility.

By now you may be thinking, "won't this hurt me as well?" Well, the advantage of owning, designing, and playing on terrain is having a better understanding of its tactical advantages. They are situational "cards" you will hold in your hand against your opponent, making it more difficult for him to get to your objectives, to assault you, and to outflank you. Not to mention, they make your games look great and add tactical depth beyond "point and click," a problem a lot of players have with 40k (especially competitively.)

Thanks for reading, thanks for following, and feel free to let me know what you think! I look forward to it!
Posted by Ed Vaughan at 11:53 PM