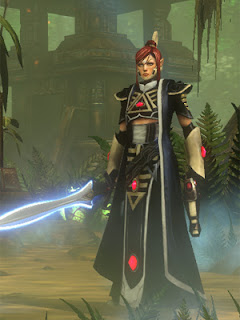 Hey folks! I posted some days ago about some topics I'd like to talk about. I've spent some time browsing through many other blogs (mainly on FTW Blogroll #3) to come up with some decent subjects, the whole time forgetting one that pertains to where I'm at now. List building!

I'm not a super-competitive player; In fact, I'm hardly much of a player at all. I've played against Imperial Guard, Necrons, Space Wolves, Orks, and Tyranids. I do study other codices (thanks Scribd!) to figure out what I would need to know if I ever played any of these fancy new armies. With my main opponents being Horde Orks and Horde Tyranids, my approach is pretty clear cut. No matter what I do, I need a lot of attacks (or shots) to match the models that are coming in.

I've never played against a super-optimized IG Leafblower or SW razorspam. If you wanted, you could refer to me as inexperienced. I do not disagree. Still, I strive for a level of solidity in my lists so that I'm not disappointed mid-game from poor list choices. I hope this approach will help me if I ever participate in a tournament (I don't know anything about competitive play for this game.)

My current 1500 list is as follows. It remains unchanged from the previous posting.

What I want to be able to do here is have a mobile force to press forward and take objectives (full squads of Dire Avengers putting out a 32-shot bladestorm on a target should work for most.) The Guardian squads almost always stay in reserve, walking on to backfield objectives supported by a Wraithlord. I don't think the Starcannon is a very good weapon for a "take all corners" approach. It's not even that great for killing marines, although that is supposed to be its purpose with its AP2. It will be the first change, he will be remodeled with an Eldar Missile Launcher. It actually drops his cost by 5 points putting us down to 1479.

So far I'm the only person in our 4-man gaming group to start heavily using tanks. I have four tanks in this list which isn't a lot by tournament standards, but seems to make a huge difference in our small games. So I have some options here; I can continue with the mechanized portion of the list or I can add some fun units to keep it more casual. Hey, maybe I can make some of the fun choices work for me well enough to perform well in a local tournament. Maybe not.

With 271 points, here are the units I'm considering:

120 pts. Second Farseer (to fit the theme of the two-Farseer force.)
Doom, Guide, Spirit Stones
This should help spread the psychic powers to wherever I need them on the field.

60 pts. 1x War Walker (to add to the existing War Walker Squad)
2x Scatter Laser
This can bring the squadron up to 24 shots and give it a small amount of extra durability. Lots of firepower for an outflanking unit.

132 pts. 5x Swooping Hawks
Exarch, Skyleap
A fun unit, by no means a min-max or tournament staple. Best case scenario it drops boltgun strength large blast templates every turn starting second. Worst case it gets 2 turns of doing so. This could possibly clear some footsloggers off of an objective. They can't be targetted back as they always leave during the movement phase they're deployed in.

76 pts. 3x Guardian Jetbikes
1x Shuriken Cannon
A fast scoring unit that can grab objectives late in the game (or contest them.) They're pretty much as resilient as a space marine but not quite as strong. Quite cheap for these pesky guys.

Unfortunately the close combat units in my codex are so inferior to the close combat units that Tyranids and Orks can bring against me, that I don't even consider them. The Wraithlord is an exception, even though he's not too much of a CC guy -- his T8 means that plain Orks and bugs can't even wound him. It's forced the Orks to take things like Big choppas and Power Klaws, and the Tyranids to take things like venom sacs.

It's a really hard decision. On one hand, I know the Fire Dragons and the Jetbike Squad will make my army pretty competitive. I really like the idea of the Swooping Hawks though. Against all better judgement, I really want to play with them. It would be great if I could somehow redeem them in the eyes of the internet. They are slightly overpriced, but keeping them stripped down like the squad I listed can help with that cost.

In other news I have succeeded in using thin foamboard to base nearly all of my Mordheim ruins! I still need to add paving tiles, sand, and paint, but I can't help but feel proud with so much terrain looking so great already!
Posted by Ed Vaughan at 5:40 PM