Much discussion is flying around recently about the 6th edition rumors posted on Blood of Kittens. It's important to take all of this stuff with a grain of salt, because all of it could turn out to be false. Still, numerous sources have posted all over the internet about 6th edition coming soon, and although we are not supposed to place trust in quantity, someone out there probably does know what they're talking about.


These rumors are interesting because they highlight some key changes in GW's strategy with the gameplay of 40k and also the marketing of it. I've always been an advocate of low cost games, and supposedly this will let players get into the game for much cheaper than AoBR. This puts them in direct competition with Privateer Press and newer games like Infinity and Malifaux. With their own starter prices steadily rising over the years this should help them attract more people to the game and the hobby.

I've also noticed that power seems to be transferring into those armies which can provide weight of fire attacks (meaning lots of shots) and those who have high mobility. If any of these rumors are true, hopefully Eldar will be a much more formidable force in the new edition -- which is possibly why they still do not have a codex in the works.

Someone on DakkaDakka made a comment I liked - "many of the things on the list seem more like a 40k wishlist instead of true developments." I can almost agree; If I had to speculate, I'd say that the major improvements to come to pass in 40k should probably be allowed pre-measuring and randomized charge movement (just like fantasy.) Fantasy 8th in general seems much more streamlined for regular, time-friendly games. Then again, all GW game systems seem to trip people up upon starting.

I don't want to dwell too much on what could potentially be nothing more than wild fantasies. I want to talk today about how to break your low points 40k games -- from kill team to 500 points. Many players play small games because they have small collections or don't have the time (or rules knowledge and time) to play through a full 1500-2000 point battle. You need not be ashamed, because kill team and 500 point games are fantastic opportunities that can be full of fun -- and awesome cheese.

One of my top tips is to strip down your commander. A lot of new players will sink points into a HQ choice thinking that he's going to have a huge impact on the game. Unfortunately, they rarely do. There are a few exceptions of expensive HQ units that can really make an impact at low points levels (Tycho/Death Company Tycho and Lelith Hesperax immediately come to mind.) Your Space Marine commander will probably not see the points returned from upgrades like Artificer Armor and neat weapons though. Keep your HQ cheap. Power armor codices usually have an option for a 100 point Librarian (which is usually the best choice,) other codices can have options for HQ units as low as 60 points.

For armies that can exploit it, tides of models work extremely well at low points levels. Very few guns can match the amount of Boyz or Gaunts, or even plain guardsmen you can put out in a 500 point game. You're assured to bury them in dice in whatever phase is their strongest. In kill team, the gap widens even more. An Orks or Tyranids kill team army can field over 30 models, whereas power armor codices can usually only field less than 10 models without upgrades. Needless to say, I always lose kill team matches when my Blood Angels go against Zni's 'nids.

The last bit of cheese i'll recommend is finding something in your codex that most opponents can't deal with at the point level. Wraithlords work well with T8, although some codexes are capable of putting out some T6/T7 models that are very formidable as well. Dreadnoughts are not quite as impervious, so I would not suggest them unless you're playing an army like Blood Angels where you can get some AV13 front facings. AV14 vehicles will almost always outperform. The odds of cracking open AV14 in a 500 point game are slim to none unless you've tailored your list for it... and if you've tailored your list for it, you're probably severely lacking in troops.

The downside to putting something like AV14 in your list is the points cost. A Land Raider can cost around 250 points base, restricting your troops options to 2 squads of scouts and a plain HQ of your choice. You'll have a grin from ear to ear though when your opponent has nothing that can even make your scouts spill out... and your tank goes to town on enemies of choice.

500 points puts a severe damper on list building and it's easy to take advantage of it. Just don't get pidgeon-holed into costly HQ units, costly squad upgrades, and overall taking too few models. DO take scatter lasers, assault cannons, and other multiple-shot weaponry to force armor saves. DO take AV14 and high-toughness threats. And above all, have fun with it! Your opponent will soon be scambling to make a hard counter to your list... meanwhile, you'll hopefully be halfway to your next strategy! These games will be fun and engaging because you will actively learn the best way to deal with a variety of threats in games that won't last all evening. 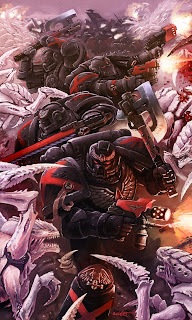 I have to take the last bit of this moment to mention a few things... one, we have a new bird to replace Nyx (so the other birds aren't lonely.) Her name is Pazuzu and you'll probably see pictures of her tomorrow. She's already crashed into my workstation a couple of times... she must really like Warhammer. Along with that, you'll probably see pictures of our WIP Mordheim cardstock terrain. We have both the box set and Blood on the Streets assembled and are basing the ruins today and tomorrow. I have to run out and get more sand and a truckload of brown paints to start finishing them up, but they look great already. I'll make sure to run down how exactly I did it.

Also, I'd like to take this time at the end of my blog to give a HUGE shout out to Bear 40k who not only has just started a beautiful looking blog, but honored me with featuring some of my minis on his page! You should definitely visit him and check out what he'll be posting in coming days.

I make a big habit of checking up on FTW Blogroll (#3 in particular, that's where we're located) and browsing and commenting on other people's blogs. So far, I have not been disappointed. I don't think you will be either! Thanks for reading!
Posted by Etna at 9:28 PM