So, things have been stirred up and have also settled down since I've last posted. The new Eldar codex has been released, making my list actually a bit more viable and definitely way more of a threat than it was before. As a result, Brian, one of the guys who swings by every other week or so, has started picking them up. Up top is his first Wraithlord painted up, and below are some Striking Scorpions...

Of course, there were a lot of changes to the Eldar book. For me, Swooping Hawks got cheaper, but have to be used a bit differently. The Farseer got more powerful, as did Guardians, which I now take. The Wraithlord is a bit more expensive but thankfully didn't get nerfed to oblivion. The list that I'm using looks like this now...

The new abilities, "Bladestorm" which is on every Shuriken weapon, and Battle Focus, which most Eldar have, are amazing, and bring the army a whole new level of mobility and firepower it didn't quite have before. This list is a force to be reckoned with, and Ellie's list had to be re-tuned to match.

What she is using now looks something like this... points values I may have to get into later. 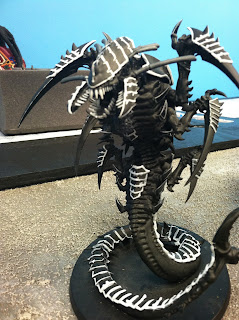 What this list has morphed into is a 6 wound monstrous creature threat that deepstrikes, along with a high-powered Warrior/Prime squad (A prime essentially turns the warriors into more primes.) Oh, and the Trygon is being painted to look like something out of TRON, or maybe a Sha of Anger from World of Warcraft: Mists of Pandaria. 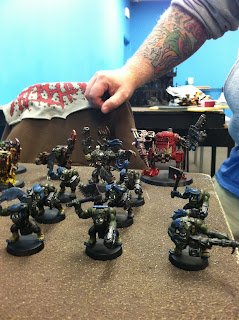 Rob has gone ahead and worked on plenty of da boyz to get in there, even taking a victory from Ellie after our game on 7/13. Rob has also started working on the Dark Angels half of a Dark Vengeance box set, splitting the contents with Kyle, who will now be playing Chaos. Kyle also picked up some old Tyranids and played some games with the Parasite of Mortex, who can be pretty crazy at 500 points.

Kyle's Chaos Space Marine army revolves around a powerful Sorcerer & Chaos Lord combo and tons of Cultists as troops. He'll need more Cultists eventually, but it seemed like a fun army to start with. Here's the list he posted.

We also have another guy named Mike showing up, bringing old-school Ultras to play in new-school 6th edition. They are doing quite well, too. Check out some of these sweet paint jobs harkening back to fond memories of 2nd edition. 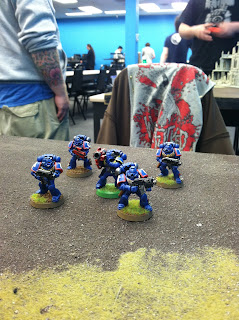 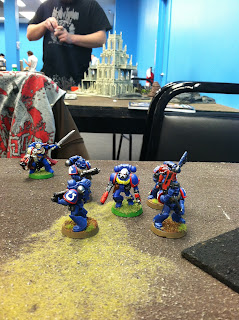 One more newcomer named Peter had shown up playing Tyranids and got a game in against Brian's Blood Angels, resulting in a victory. No pictures were taken that day, though.

There is also the news of the departure of Sarah, who was Games & Stuff's minis coordinator. Her place was taken over by Mr. Patrick John, who is already hard at work carrying the torch for all of us mini-wargamers. If you're reading this, thanks dude! :)

Terrain is making progress in the store, two new 4x4 tables are being built, the 3x3 demo board is nearing completion I believe, and a lot of the 2x4 table-toppers (to switch between 4x4 and 6x4) are now painted solid black with cheat sheets for Infinity on them, and I assume will have more info for other games as well. We notice progress and love it!

Is that everything? Are we caught up for the week? I leave you with this pretty cool picture of me failing to take down a Trygon... you can only guess what happened next turn... 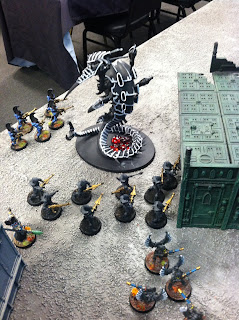