The last Monday in April was the first of our local game store Games and Stuff's "Necromonday" events, hosted by a guy named Dylan I had never met prior. I really enjoyed GW's specialist games range, as evidenced by the Mordheim posts I occasionally get around to. Naturally, I was pretty stoked to try out Necromunda, a game that I've never had a chance to even see in person. It was virtually phased out in the area by the time I had started Mordheim. I don't have a lot of sci-fi models suitable for a Necromunda gang, but I was thinking at the time that if I liked it enough, I'd probably go home and buy a metal gang, probably Escher, or Redemptionists. I've been pretty partial to the model of 'The Caller' also, even though I have no clue what the relevance to the game is. 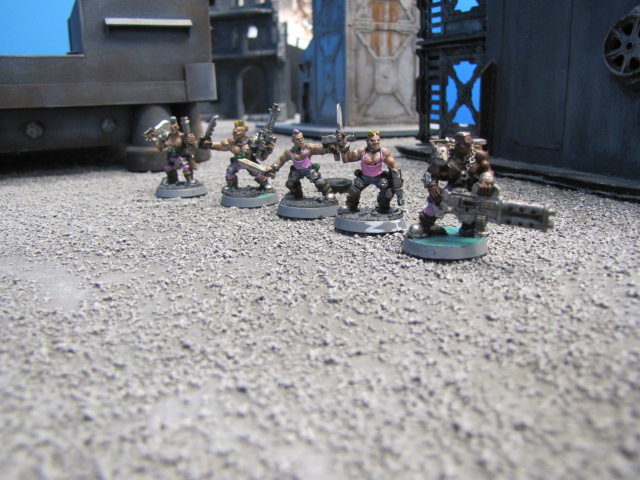 There's a fair amount going on in Necromunda that isn't all too different from Mordheim. You have your range penalties, parries with swords, the old-school "M" statistic (for movement,) and most guys have horrible leadership scores. You buy gangers and equipment with a set amount of credits. For the purpose of demoing the game, Dylan split up his 10-man gang into two equally-equipped and equally-sized 5-man gangs, so he could demonstrate how the game operates. 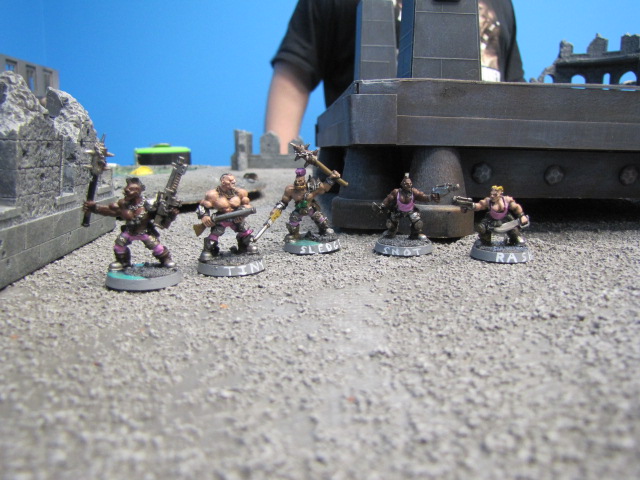 Dylan's gangers are from the Goliath gang and are pretty well painted. When they're all together, they look like a cohesive unit. They also have names on the base rims, which I always liked about specialist games warbands/gangs -- when people took the time to do this sort of thing.

We are pretty lucky at Games and Stuff to have some interesting Necromunda-ish scenery available for the shots. The stuff is pretty old, but a couple pieces of terrain have bulkheads and other stuff incorporated to make it feel "Hive City" enough for some shots. 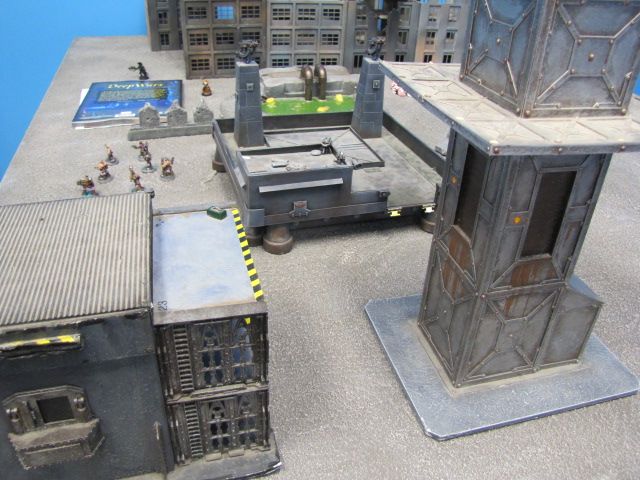 Overall, the game is very similar to Mordheim in terms of objective collection and one-on-one fights. A lot of guys ran out of ammo/had guns jam, and wound up getting into hand-to-hand. Along the way, we were both collecting scrap, which is sort of like the wyrdstone you collect in Mordheim. After some pretty brutal rolls, I wound up winning the demo and scooping up all of the loots. Pretty fun game, indeed, and definitely made me want to get into it. 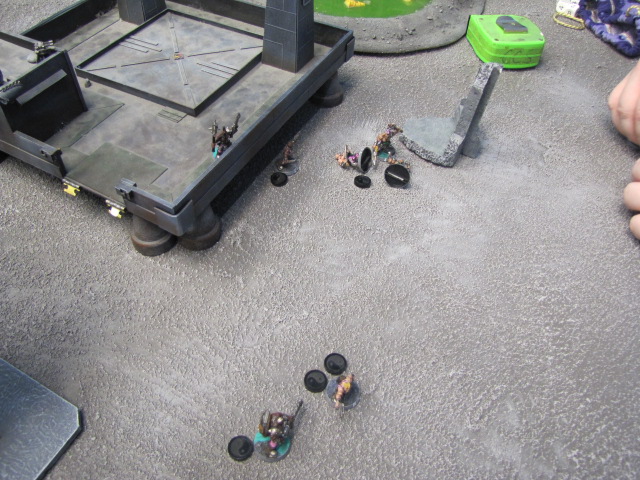 One of the saddest blows came a few days after this though. Early in the morning, rolling through blogs, I stumbled across a growing tide of messages explaining that Games Workshop's metal production is effectively ceasing, and any metal stock they have left will no longer be replaced. There are no plans to remake these metal miniatures in Finecast, either, which means that all Specialist Games ranges are essentially discontinued, as well as several collectible stuff for WHFB/40k (Tallarn, Mordians, etc.)

As of this writing, a lot of the stuff that is sold out is now completely gone from the website. This includes the Necromunda Underhive rulebook, which I was going to pick up. Several Mordheim warbands are gone (Notably Beastmen) and it looks like eBay will be the place of choice to play these games.

I should also mention Dylan set up a Mordheim Monday on the Monday after, which I think was May 6th. We got in a quick game, but the scenery wasn't quite the same, although Dylan had some well painted Ogres for his warband. Both games I think will continue to be played on some mondays in the future, however the death blow to SG restocks certainly hurts the nearly non-existent SG community. 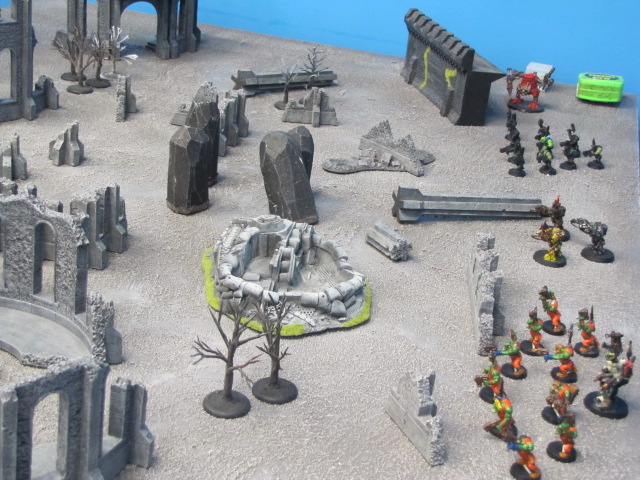 Robbie is now rolling with a WAAGH! of his own. Although these boyz were painted by Kyle, Robbie has recently posted pictures of some Death Skullz he has started painting. On 5/4, Kyle and Robbie played a quick game before a tag-team match in which Brian (Blood Angels) and I (also playing BA) teamed up against a double-force of space orks. 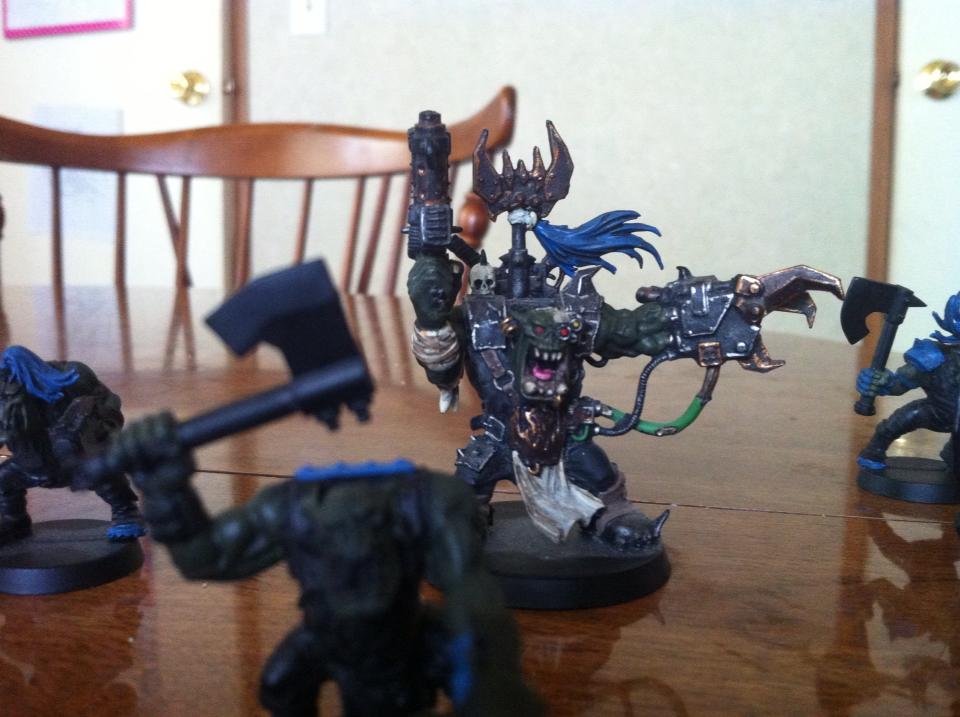 It looks like the blue is coming along nicely. In the above game, Kyle plays Tyranids and tries out some Zoanthropes for the first time, leading the charge against the Ork mob. Eventually the Great Devourer struck again and gobbled up the greenskins. 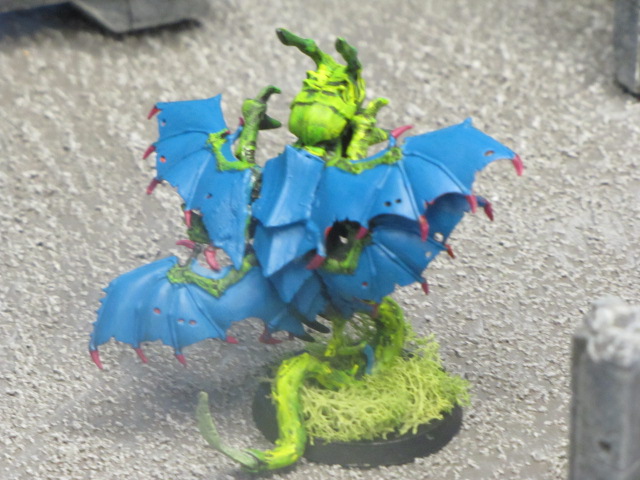 There's some pretty neat models in the Tyranid force, like this guy, which I think is a conversion for the parasite of mortex(sp?) He spawns ripper swarms when he wounds people. The conversion is done with gargoyle wings, genestealer arms, an old metal ravener, and some unknown head. 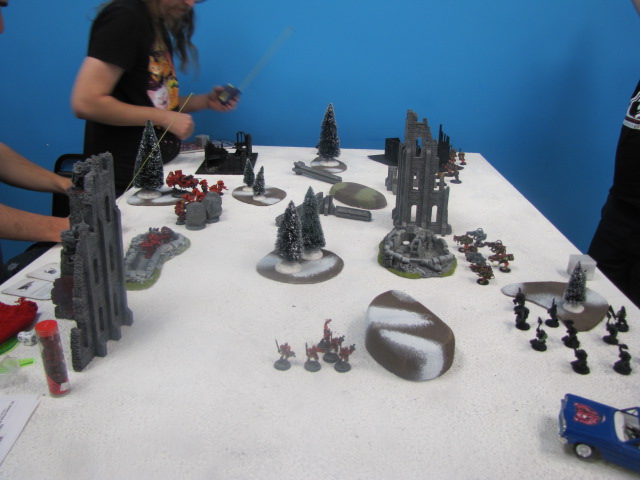 The team game wound up being brutal. Our first Blood Angel turn was a huge success, as we managed to blast the Lootas into a morale failure and watched them run off of the board. Our ranks crashed close to their backline and we were in a really good spot as of the first turn. Kyle and Robbie were pretty uneasy about the situation in the game from here on in, but this would be one of the only turns where we did REALLY well. 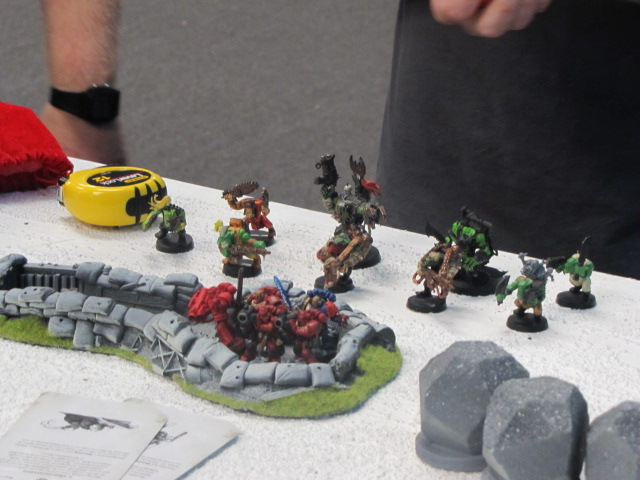 At some point, we have to face up against this Snikrot squad coming in from our back edge, right behind Brian's Devastators and Librarian. Included in the Snikrot squad is the Warboss and two burnas, so we immediately take a lot of heat. We try to salvage it, but with no troops nearby the support these guys, our central firebase crumples as well as one of our warlords, and the game is pretty much downhill from here. A deffkopta is able to contest some objectives at the end of the game, we fail some charges, fail to damage Meganobz, and get shot up a little more than power armor would like. Overall we lose, although it was fairly close to being tied, with the end of the game leaving us all feeling like we lost. Brutal! 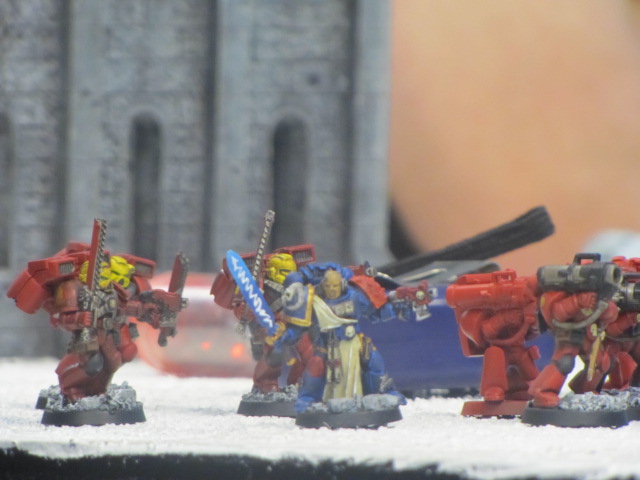 Here's a parting shot of some of Brian's painted Blood Angels. Much more complete than mine! I didn't happen to take any pictures yesterday (5/11,) as a lot of the guys couldn't make it, but I did get to meet an Ultramarines player coming into 6th and got in two games against him. If he can make it out again, I'm sure you'll see pictures of the well painted boys in blue in a few weeks.

I won't be posting any pictures next weekend as I'm not sure that I'll be gaming -- we are playing a show at the Sidebar on Saturday and I want to be well rested. For those interested, Kyle and I play in Ralph, a thrash metal band. We have recorded an extremely low-budget mono recording of 'Deny the Witch' which sounds absolutely atrocious on mobile devices, but should be at least somewhat audible through computer speakers. Check out the links...

If you live in the central Maryland area or about an hour west (Fredrick/Hagerstown,) come out to our shows the 18th/19th! I'll definitely nerd out with you over some hobby gaming! 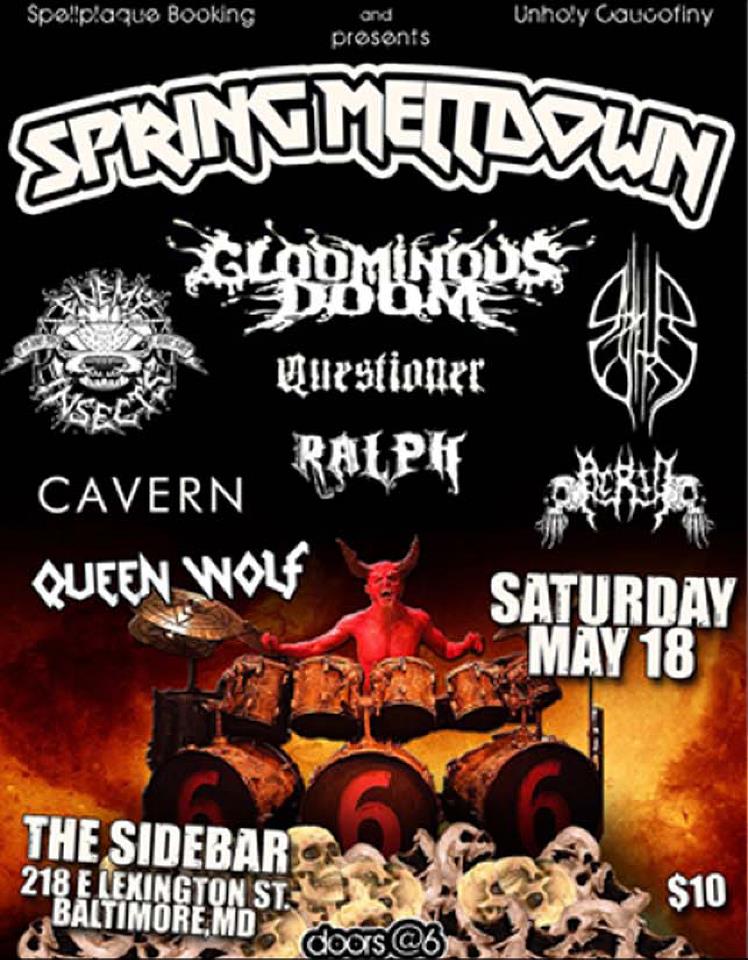 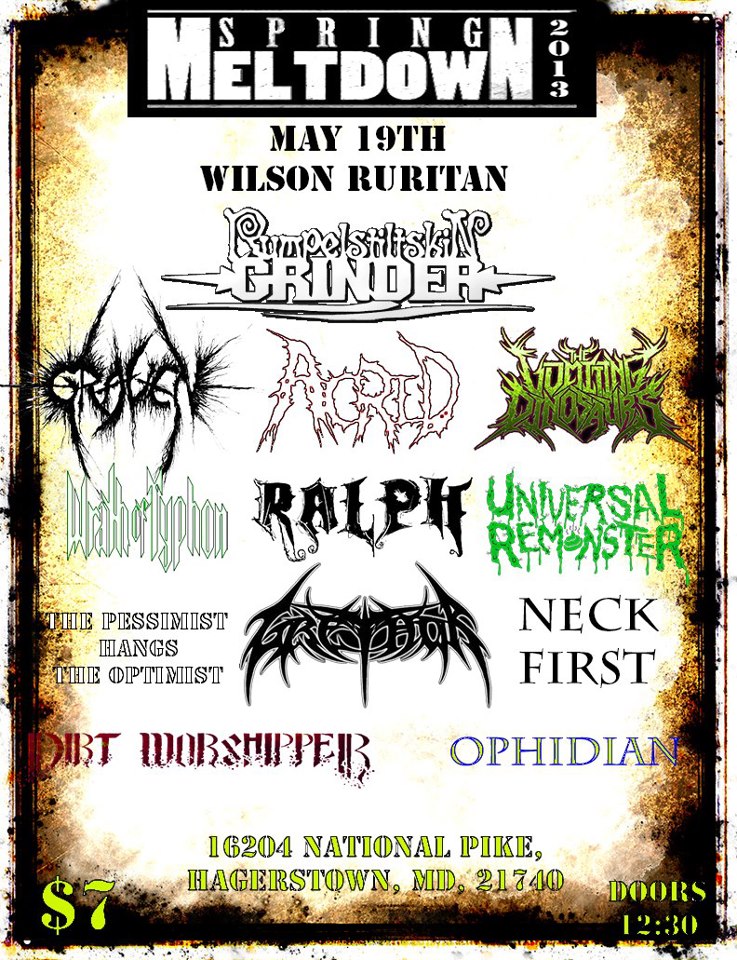