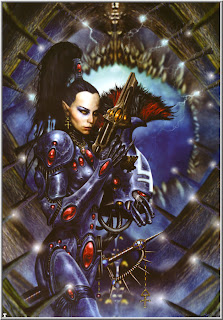 I technically started getting into the GW hobby in 1999, during I believe 40k's 2nd/3rd edition, and Fantasy's 5th edition. I've visited Games Workshop stores a lot, known a lot of employees, and I've watched how the game has grown and changed as both players get older and the company's business scheme has changed. In my own life, 40k was never the huge main hobby, but one of several, like D&D, online gaming, music, and writing. I still love the premise of the game though, and the miniatures. I've put a lot of time into them, and had some fun experiences. The problem is, the 40k game just seems so... disorganized right now.


One of the main problems I've always had with Games Workshop (and from the posts on the internet, most other people have had this problem, too) is the horrendous short-term-burst selling approach. On the outside, it would appear that the games and community are great. Free, well painted tables to game on, hobby bars (sometimes with communal paints,) and an abundance of players just like you, looking to play a game. Until the guy in the red (or black, or whatever color they'll use next) shirt comes up to you and gives you the pitch.

I don't mind sales pitches. I don't mind meeting employees, getting their advice, talking about the hobby, or whatever. What I do mind is the odd coincidences that tend to happen afterwards. For example, not buying anything? Well, sorry, we may have to use these tables for our these guys who have armies way larger than yours or bought something today. Have you hinted that you have a bit of money? Well, let me harass you during your entire experience here in an attempt to convince you that you need a 40 dollar box of plastic. 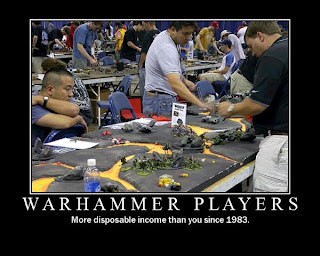 I'm a somewhat competitive player. I'm not the type (anymore) who will sit around with a game playing out endless scenarios to try and get better at it... but I do like the idea of tournaments. I guess part of it is the simplicity of having some other guy pair you up at a table against someone you don't know, getting a game in against someone whose strategies you have no clue on, and the slight possibility of that person being cool enough to want to talk to after the game. I'm not in it for the prize (unless it's Magic: the Gathering.) Hobby games are more of a fun experience to me.

Games Workshop seems to have, for several years, completely turned away from catering to a casual player. 6th edition moves heavily towards the release of new "flyers," arial gunships and the like, which can go up to $75 a pop. The standard tournament level seems to be 1850 or 2000 points, which is an absurd investment of $500-700 (hugely variable for some armies, and where you get the minis from) to play in such an event. Oh, and if you're not playing in the event, remember, those tables are going to be needed for those who are...

Our own 40k community has been shuffled around quite a bit. I mentioned last post that the Glen Burnie Battle Bunker closed down, and Dropzone Games opened in its place, but that place is filled with essentially the same crowd that it was before, high-points-level very competitive players, and it's even run by former GW employees. Places like Dream Wizards in Rockville are too far away, other stores don't have adequate tables or terrain most of the time. Sometimes, it's hard to know where the caravan of players has travelled to on this particular week.

Of course, you don't have to play the GW way. I am moving towards getting my horrendous amount of play-time down (no more 3+ hour games that become downright exhausting.) I want 40k to be a hobby I can enjoy like my other games. I can get through a game of Smallworld in less than 2 hours every time; Same with Cryptozoic's Wizard Battle game, and M:tG, and WOWTCG, and just about everything else out there. I feel Games Workshop's strongest future competitor is Infinity, which can be played (from what I hear) in a very small amount of time. While Infinity seems interesting to me, I want to work to make my existing 40k collection into something fun and usable.

I also want other people to enjoy it too. The game seems like no fun when you're trapped into what can become an entire day of standing around a board of army men. We've tried to break up the monotony with smoke breaks, food, and beer, and it helps... but the real thing that makes the game fun is actually, you know, wrapping it up. It also gives the opportunity to decide if you want some more games, before you get burned out on a single drawn-out battle.

What does this mean for me? Well, even though I'd like to buy more sweet dudes that will sit un-primed, I want to mainly focus on 500 point games to learn the basics concretely in 6th edition. It also gives me much more incentive to paint, as 500 points isn't a lofty goal for a painted army. If I want to check out something new, 500 points is only (usually) very close to a battleforce box and a HQ! I want to forge a new group of 40k players who don't take this game so damned seriously and just want to have a quick bit of semi-competitive fun. This game doesn't have to be a wallet blowout followed by years of regret. I hope to play and meet with some people soon who don't treat the hobby like this, and instead take time to maybe personalize and try out a small force before committing to the monstrosity that the game can become.

The intricacies of playing at 500 points regularly will surely have to be worked out as we go... but at least we'll be getting use out of armies collecting dust, and providing the blog with great pictures in the process!
Posted by Etna at 12:26 PM