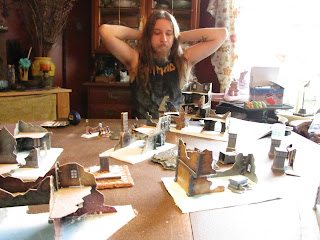 With all of the hype of the 6th edition box set soon to by dying down (the first packages will be arriving in just a few days after this posting,) I wanted to play some Mordheim. So, Znijurru and I formed new warbands and played a starter game...

A quick primer on our armies. I'm playing Marienburg, and I have an abundance of coin to re-buy whatever poor chaps die on this expedition. As it would turn out, a lot do die. You may notice a new addition to the ranks; I didn't feel it necessary to do a painting post on him since those generate such little interest. So here I am trying a battle report...

From left to right -- Swordsman, Halfling Cook, Champion, Youngblood, Captain, Youngblood, Champion, Warlock, Elf Ranger, and Swordsman. Yeah, I start the game with upkeep 40gc, but the hired swords are essential and amazing early on. I have 155gc stored. Models are armed WYSIWYG (What you see is what you get.)

Zni's skaven are armed to the teeth with slings and clubs, but some of them also have spears. The assassin adept (leader) carries Weeping Blades, and the Sorcerer has a Warplock Pistol. If you don't know much about Mordheim, know this -- Skaven are really powerful. They have access to more heroes (which in turn means more gold generation) and also ridiculously powerful ranged weapons... in the form of slings. This is why nearly everyone here is armed with a sling.

Our mission is skirmish, where the situation re-enacts two warbands coming across eachother in the ruins of Mordheim. The first warband to get routed loses. Bonus experience comes from slaying enemies. 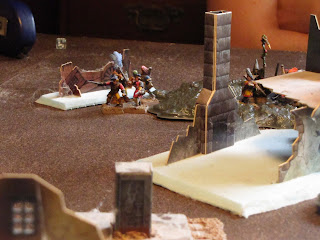 My deployment. My halfling and elf are located higher up in a building, taking advantage of a building that can see most of the field. My warriors are divided into two groups, but are close by in case it's needed. 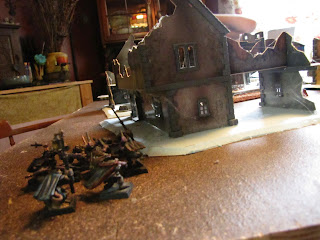 Zni deploys all of her rats in a corner of the board in hiding. Seeing that they aren't likely to split up, I'm going to have to do some adjusting... 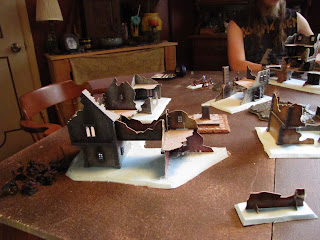 Here's an overview of the entire board, before we start the game. I think Zni wins the roll to go first, judging by the pictures. I can't remember. Maybe I should keep more detailed notes for this stuff. 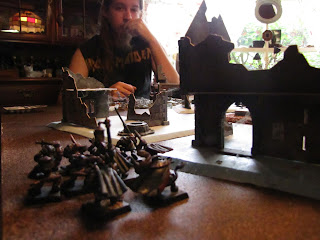 Zni runs forward with her warband en masse, poking out into an uncovered area... 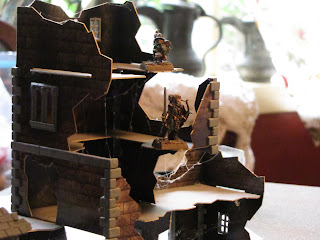 On my turn, Lardo (the halfling) and Yriel (who is having some trouble climbing) fire some arrows into the crowd of rats, stunning the sorcerer. 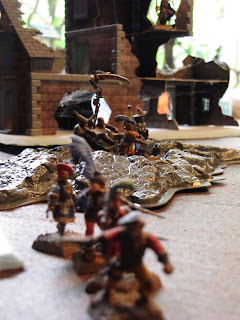 I also start moving my guys towards the rats. I know she can hit me with slings next turn, so I move my guys in to become meat shields... 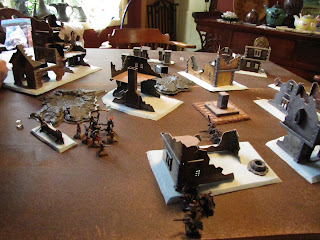 Zni's movement leads to her breaking off her warband into two smaller sections. The one up top is all verminkin with slings and clubs, and the bottom is all of the heroes, minus the sorceror who is now lagging behind (only knocked down now.) I'm thinking this is great for me, as I'm not taking nearly as much sling hate as I thought, thanks to all of her run moves. No casualties this turn! 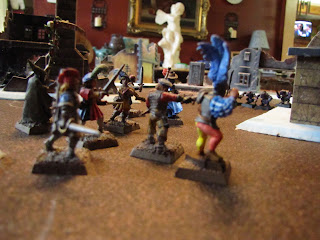 Figuring I won't have the range to charge them, I hold back and maneuver to try and put as much padding between my captain and the enemy. Hopefully I'll get lucky with the dice -- but nope. Warlock fails his spell, all of the shooting goes haywire, resulting in only a knocked down night runner. I planned poorly and now I was out in the open about to face a brutal return sling volley. 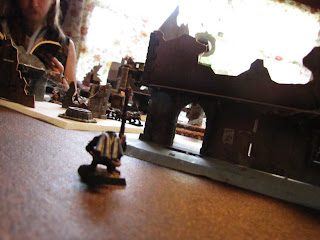 Zni's turn. A lonely Eshin Sorceror gets up from his dirt nap, ready to rejoin the fight. 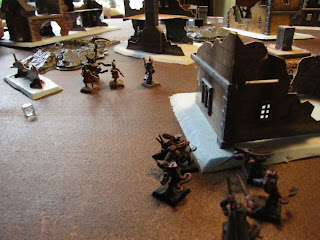 Zni's night runner gets back up and stumbles forward, while the assassin adept moves as well. A night runner and two black skaven stand back ready to throw slings, and I suddenly realize that all four verminkin have stood still as well, and are in range to fire. Two swordsmen die, as well as a champion and my captain! Man, what a tactical blunder this was. Slings are just too much. 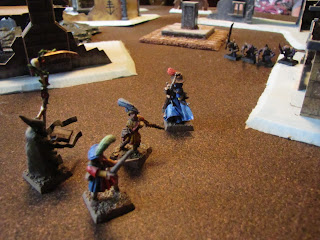 The turn passes to me and I'm forced to take a rout test with my surviving champion, who rolls an 8 and fails. Marienburgers lose! Due to the monumental blunder we agree to let this one go "off the record" for a campaign -- neither of us felt like going through the experience and exploration process just then, and I had lost by a pretty wide margin. I'll have to plan more carefully next time to avoid getting killed in the open streets.

Did you enjoy this battle report? Comment and say so! This is my first attempt at something like this, so let me know if you want more! As always, thanks for reading!
Posted by Ed Vaughan at 10:58 PM