Rock Out With Your (Swooping) Hawk Out! 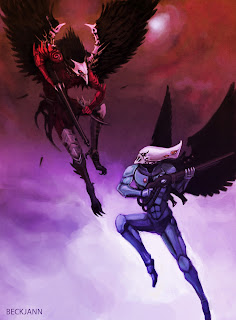 Sheesh - looking back, it's hard for me to believe that it's been over a year since I last talked about getting some Swooping Hawks for my Eldar army. Thanks to a recent eBay acquisition, and a local game store purchase, I now have sixteen hawks, and boy have they changed in the sixth edition environment.

A little background for the unaware: Swooping Hawks are largely regarded as one of the worst units in the Eldar codex, especially for tournament play. They are high in cost, with expensive upgrades, equipped with basic wargear that doesn't quite make sense, and they can't hold objectives. There's plenty to dislike, and even when used with finesse by "top tier tournament players" (if you believe that sort of thing exists) they are typically doomed to fail.

Still, Swooping Hawks have some things going for them. They are one of the few (possibly the only?) unit in the game that can return to reserves and re-deploy. In doing this, they put down a large, bolter-strength and AP blast template anywhere they want. The power is used in the movement phase to withdraw -- so although you sacrifice them being able to interact with the board most of the time, they will essentially be invincible, seemingly soaring higher than flyers. 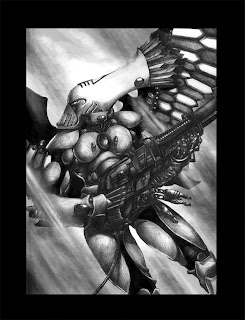 Swooping hawks have wings for extended movement and a standard rifle that fires twice as far as a Shuriken Catapault. They can do well to out-range Imperial Guard (or equivalent, toughness 3 infantry) and then shoot them to bits. In addition, Haywire Grenades and the Intercept upgrade allow the squad to take down tanks. The squad also fits in the Fast Attack slot, although it will act more like a Heavy Support unit at times. Heavy Support is a very sought-after addition to any Eldar list and an army will probably have their slots filled, so not contending for slots is good.

Sixth edition has brought along some interesting changes. All tanks are much more fragile now, and Swooping Hawks exploit this much better with beneficial changes to Haywire Grenades. But in general, players are seeing that tanks are becoming less fragile and are taking more foot infantry, which Swooping Hawks happen to be good at dealing with, too! Reserves (and reserves bonuses) are also easier to get -- your Hawks will deploy FAR more than they did in fifth edition, and you won't even necessarily have to take an Autarch. 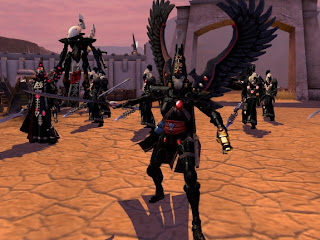 Play your cards right, and you may be able to leave them in the game towards the end; With a high movement range they can hopefully pull squads off of objectives or contest very well. Can you imagine trying to get "Slay the Warlord" versus an army led by Baharroth? The Hawk tactics are all about denial, not necessarily impacting the board. In "Purge the Alien" and "The Scouring," you can make sure the Hawks never yield their victory points to your opponent simply by keeping them off of the board, but still have them contribute to the battle. I wish more things in 40k did this.

Let's not forget, though, that they look great and anything with little bits like feathers or gems is usually fun to paint and yields great results. All of the models, old and new, are in very dynamic poses and are sure to turn heads in public. That is reason enough to try this completely crazy beginning of a list: 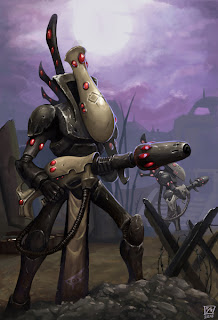 No idea what the troop basis is going to be yet, probably Avengers or Storm Guardians in Wave Serpents, or maybe a Wraithstar since Wraithguard are cheaper now. Maybe I'll use some  Dark Eldar allies to get some Scourges. Nevertheless, I'm going to be working with the Hawks a lot more in the near future and will post some 40k battle reports for you guys soon!

Have questions/comments about Swooping Hawks? Post them! I check my comments regularly.
Posted by Ed Vaughan at 3:35 PM