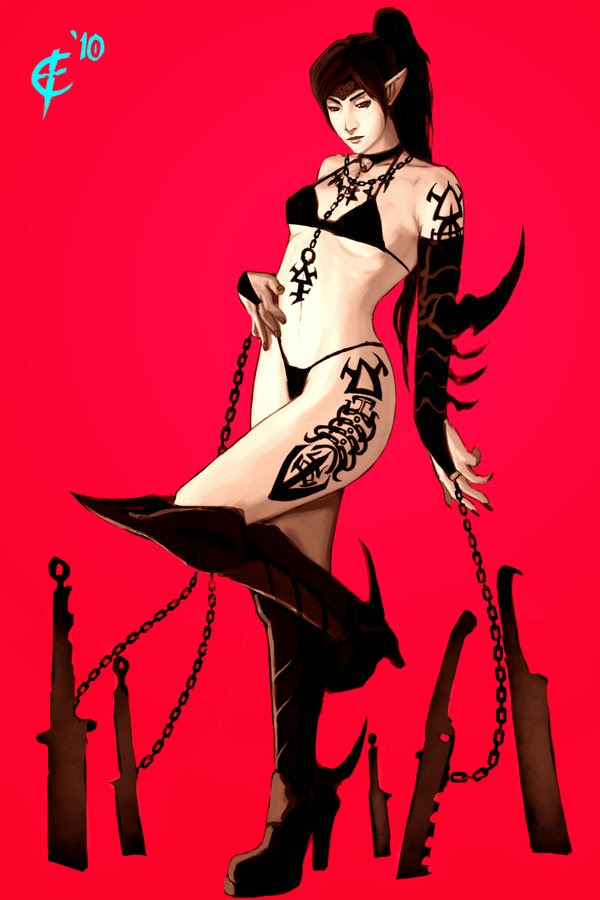 The mission: as usual, Battleforce Recon, a 500 points match with no restrictions. A lot of people put restrictions on 500 point leagues such as no AV12+, no models with 3+ wounds, no models with a 2+ or greater save, or other nonsense. Through our months of testing, though, we've found out that 500 points is actually surprisingly balanced for 6th edition.

Rounds lasted an hour each, with four players attending for a 3-hour, round-robin affair. A number of people didn't show for whatever reason, but it's no biggie. Plans are already in motion for the next Bladestorm Tournament, a 1000 point random-mission event!

Eric entered with a list that looked pretty powerful. Something along the lines of...
A list like this looked pretty tough, with most opponents having a hard time moving the troops. The Helldrake did as expected, moving around the battlefield providing devastating torrent templates all over everyone's army.  Eric's rolls weren't with him today, though, and he actually wound up going 0-3. The Helldrake, while formidable, was usually chewing up squads that were worth much less than the 170 point investment in the flyer -- Cultists, Dark Eldar Warriors, and Hormagaunts.

Our Tyranid player was Peter, playing a list mostly revolving around a tough Hive Tyrant.
The small amount of troops on the field meant two things for this army -- you could completely ignore the Hive Tyrant (which surprisingly, nobody really chose to do) and wipe out his guys that can score, or you can pour your efforts into the Hive Tyrant, which frequently outpaced the rest of the army and wound up being something of a 250+ point distraction. Peter ended up going 2-1, winning games against Eric and edging Kyle out by one point in their match. Warriors are still really good in 6th edition, and hold objectives well. Hormagaunts, well... not so much -- but having Synapse creatures conferring fearless bubbles to other Tyranids certainly helps them stick around.

Kyle came in 2nd place (winning a $20 Games and Stuff gift card) playing Chaos Space Marines in a different way. His troops have a lot more presence on the battlefield and he has more distraction games he can play with three non-scoring units.
The Murdersword was especially effective at killing the flying Hive Tyrant -- Kyle was able to roll four AP1, instant death wounds on the first round of combat. The terminator armor seemed to come in handy as well. Nurgle bikers with high toughness went head to head with Dark Eldar and CSM well enough as well, utilizing flamers to thin herds wherever possible, until they died. The cultists remained mostly untouched in all games, and even held their nerve against the Helldrake.

In the end, though, Kyle's tiebreakers were one point shy of Nicholas Aniello, the winner of a trophy and $40 Games and Stuff gift card. Nick's army is relatively similar to the Battleforce box, oddly enough, just going to prove that you don't need to be flashy to win a game of Warhammer 40k these days -- despite the urge to empty your wallet on the latest goodies at the register.
Nick performed very well versus Tyranids, a relatively easy matchup considering the amount of poison and volume of fire/attacks he can supply to the low-model count armies. Where he really started hitting a snag was with Nurgle-empowered guys -- the close combat attacks of the Hydra gauntlets didn't mean much when they needed 6's to wound. Still, his mobility and speed allowed him to snag secondary objectives like Linebreaker and First Blood quite easily. In the end he was 2-1 like the rest, but had the best tiebreakers due playing the objectives extremely well in all of his matches. Congratulations Nick and Kyle!
Posted by Etna at 9:43 AM