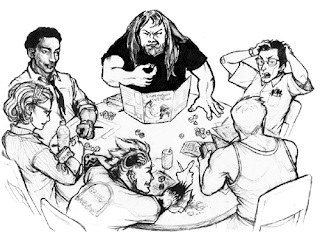 Dungeons and Dragons has been a hobby game favorite of mine for years. From the very moment I started my teenage years, I was checking out AD&D 2e books from the local library system, pouring over pages and pages of fluff, stats, and pictures. I can still remember just how new gaming was to me then. It was exciting when the local library first added computers with internet access in the age of Windows 95/98, and basic HTML web pages filled me in on the details of what this whole tabletop gaming thing was all about. Around this time I also found Warhammer (and 40k) on the web, and, excited by the prospect of combining sweet miniatures with a tabletop rules system, I just could not wait to play this amazing, fantastic, magical game.

Cut to the release of DnD 3.0. Walking along in a bookstore with my grandmother (I must've been somewhere between 13-15 at the time,) I spot the newest iteration of DnD in it's own designated gaming section -- in Books-A-Million. With my slim summer earnings combined with my grandmother's aid, I am able to procure a core set of rulebooks, and eventually the Forgotten Realms Campaign setting. However, I'm young. I didn't actually get to play D&D for a long time... the closest thing I got was running small adventures with my grandmother as the only PC. Surprisingly, my grandmother loved the idea of an imaginative game where you kill the bugbears and save the town (for now!)

It wasn't until I moved out on my own that I actually got a shot at playing. And by this point, 3.5 had come out and made most of my books half-worthless. Still, as soon as I was able to walk up to my friendly local game store by myself and join a campaign, I did. I played a lot of 3.5 at the store, from a campaign with all evil PCs, to Iron Kingdoms (the world of Warmachine) and even to the Warlord CCG setting. A few things always bugged me though -- why does my Wizard become useless when he runs out of spells? I really just got insta-killed? How do I get my friends to play when explaining this massive rules-set is a royal pain in the butt?

Eventually life called, groups died down and switched systems, and I was no longer able to frequent my FLGS as much as I'd like. I didn't play much 3.5 in its ending days, but I did pre-order the whole 4e core set of rulebooks, looking forward to an era in which my wizard didn't run out of spells and suck, where traps didn't disintegrate your entire body instantly, and where I could explain to new players, "The green card can be used anytime. The red one is once per fight. The grey one is once per in-game day."It all looked great, but I didn't really get to play 4e until quite a long while later.

When I got involved in construction, I noticed my co-worker had a D&D 3.5 sticker on his work van. Eventually I asked -- and found out that he played 4e regularly at the same FLGS I used to frequent! With time freed up, I made plans to get back into D&D for a little bit. Once I hopped in, I started a group at home on a whim -- and it genuinely seems that 4e caters to new tabletop players well. I think we're a little over a year on our home campaign. Our Dark Sun game at the FLGS has nearly hit a year as well.

D&D Five is now officially in development. You may know that there's been a long-standing battle between the players of 3.5e and the players of 4e as to which is superior. 3.5e is still running strong as Pathfinder, Paizo's way of interpreting D&D. Some reports even claim that Pathfinder is outselling 4e. I really don't care much for edition wars, but after finding a few Players Handbook 3.5 copies in boxes at my parent's house, I decided to really sit down and give it a think. We've been playing 4e for a while, and it's a good system (especially for newbies,) but I have my gripes with it like everyone else, after a year or two of solid experience.

The Problems I have with 4e:
- Nothing is deadly. At all. The chances of TPK (total party kill) are slim to none if the party is balanced, has extra PCs, and/or knows what they're doing.
- Stun and Daze turn some of the best monsters into jokes.
- Dragons, even after the Essentials revision, still aren't as scary as they used to be. Beholders seem to be genuinely more formidable monsters, able to deal with more adventurers at a time.
- Healing can sometimes be so over-abundant that it seems near impossible, even over the course of an adventure, for a party to run out of it.
- The Skill Challenge system seems to aim to replace genuine roleplaying, and often is discarded by DMs entirely (myself included.)
- Traps making attacks against characters seems clunky; I feel the characters should be making a roll to avoid them.
- The Forgotten Realms is destroyed and replaced with a version that has about 1/8th of the fluff, and 1/100th of the game statistics, of previous versions.
- Not enough WoTC or 3rd party supplements. 2e had the benefit of being out for 20+ years and 3.5 had the benefit of having a wealth of 3rd party publishers on board.
- The striker is the star of the show, and can usually do more exciting and crazy stuff than the other roles.
- No Ravenloft, or Expedition to Castle Ravenloft. I really liked the latter in 3.5e.

The Problems I have with 3.5e:
- Books are now out of print, which means everything is either Pathfinder, used, or collectible.
- The game can sometimes be too deadly: Players are not a fan of instant death. It can make the game progress slower and the players walk on eggshells throughout adventures.
- Some classes can feel too one-dimensional (Fighter) whereas others feel too powerful for the world to deal with (proper spellcasters.)
- Larger amounts of skills, different types of AC, different types of weapon damage, etc. all further complicate the game, making it a more difficult system to teach players.
- Feels less functional and more clunky as a board game (the fighting system) than 4e.
- No Dark Sun. Although I suppose you could homebrew a translation, I really like books instead.

The Problems I have with AD&D 2e and under:
- Thac0. It makes me afraid to even explain the rules, even if there is the largest wealth of campaign settings and adventures.

I think I want to find a way to round off my current home campaign for the moment and play a little 3.5... if the players are up for it. One of the other players has brought up DMing 3.5 recently, and I always love an opportunity to take up a PC.

Email ThisBlogThis!Share to TwitterShare to FacebookShare to Pinterest
Labels: DnD